Students at K-State may use the restroom that fits their gender identity, according to posters that appeared on some bathroom doors on campus Thursday.

The posters, which are printed on pink printer paper, said, “According to Kansas State University’s Office of Institutional Equity, individuals are entitled to use the restroom that accords with their gender identity.” Below that, it said, “Women’s Studies Department.”

Before making the posters, Corbeille confirmed the information with the Office of Institutional Equity.

“It’s based on the fact that there’s a policy of nondiscrimination on campus … I did check with (the Office of Institutional Equity), and transgender people do have the right to use the facilities of their gender identity,” Corbeille said. “So we just went ahead and made the fliers.”

Travis Gill, director of the Office of Institutional Equity and Title IX coordinator, said the poster is accurate. While it is not a written K-State policy, it is an internal practice by the university. This is due to interpretation of federal Title IX law.

Gill said it has been the university’s practice since he arrived in May 2015. He said he does not know how the law was interpreted before that.

The university’s internal practice does not mean anybody can use whatever bathroom they choose.

“It is not anybody can use any restroom they want,” Hubler said. “I as a woman cannot just go in and say, ‘I feel like using the men’s bathroom,’ because that’s not my gender identity. I do not identify as a man. The policy says you have the right to use the bathroom that accords with your gender identity.”

Chelsea, a K-State senior transwoman who said she wanted to be identified only by her first name out of fear someone could find a way to change her gender in K-State’s records, said she has not personally had issues with bathrooms at K-State, but she knows of other members of the transgender community who have.

“I can’t expect my experience to be typical,” Chelsea said.

She said she knew the policy before seeing the poster. If it were not the policy, Chelsea said she would not have come to K-State. When she first saw the poster, though, she said she was worried that it would say the opposite of what it did.

“I’m not saying K-State’s a perfect school, but K-State’s much more accepting than a lot of other places,” Chelsea said.

The poster, Hubler and Corbeille said, is intended to inform people of the university’s practice.

Gill said the Title IX taskforce typically provides education and training on a case-by-case basis. As this semester progresses, though, the taskforce will investigage methods for an effective way of educating the greater campus community.

“(The Title IX Taskforce) will work as a collective to ensure that we have the best model and the best messaging, and we hope to roll that out as soon as possible,” Gill said.

Hubler said the poster was sent to professors in the women’s studies department and various student groups helped put them up. She also said anyone is free to copy the poster and place it on doors.

Corbeille said she would like to see the poster on all bathroom doors on campus.

A potential problem with the posters being placed on all the bathroom doors, however, is approval from the K-State Division of Facilities.

Sump said that according to OSAS publicity regulations, a poster may be placed on a building’s bulletin board if the building manager approves. To display a poster anywhere else in a building, including bathroom doors, facilities must approve.

“It may not seem like this is an issue for women’s studies, but women’s studies, our department addresses not just women’s studies, but gender, women and sexuality,” Hubler said. “We really see this as something that is relevant to our educational mission at K-State, and we want to support our students. We have trans students, and they have reported to us that they feel uncomfortable sometimes going into the bathrooms that accord with their gender identity. And we feel like if people understand that they have a right to be there, then everything will proceed more harmoniously.”

Chelsea said K-State should set the example when it comes to equality for the transgender community, adding that there are several areas where the university should improve. 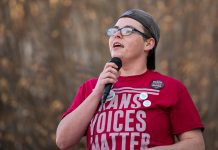