Home Featured Home Hale librarians are there to help

Tiffany Bowers, freshman in marketing, and Adam Carr, freshman in human resources, are eager to go to work at Hale Library every day, where they spread their passion of learning with others, according to Bowers.

“People think of libraries as a place to just study and check books out at, but until you work here and see all of the time, research, energy and effort that goes into it, it is endless,” Bowers said. “It’s actually really interactive and fun.”

Bowers said she dove right into the library when she arrived at K-State this year and became a Libraries Student Ambassador.

“I’m like a library nerd,” Bowers said. “Libraries have always kind of been my place. I have been really actively involved with libraries for a long time. In my hometown, I volunteered at the public library for six summers straight. I was also involved in the middle school and high school library.”

“K-State is a great place to work at,” Carr said. “Out of all the universities I’ve visited, K-State has always had that family atmosphere. You feel like you belong to the community, and that’s especially true with the library. We’re one big family. We like what we do.”

Both Bowers and Carr worked at public libraries in their hometowns before coming to K-State and said they have never experienced a library like Hale before.

“I especially love Hale because it’s so unlike any other library I’ve been in, because it’s a research library,” Bowers said. “I get to help students, my fellow peers, with any and every research question that they have. I get to work in an enormous, beautiful building that has so much history. It’s really hard not to fall in love with it.”

Bowers said she has had a passion for libraries since she was young, and she spreads her passion by helping other students see how interesting Hale can be.

“Hale is huge; it’s such a big library,” Bowers said. “My favorite question is when people come to me and they’re like, ‘I have never used this place before. Where do I even start?’ I love helping answers their questions and making them feel satisfied in the end. We try to push to have people leave with no questions left.”

Carr said coming to the library can be an interactive experience, and there is a very positive and energetic atmosphere.

“I think that for us, we get along and our positivity reflects back on to people,” Carr said. “We like to show people how fun and interactive our library is.”

Bowers said both her and Carr spend time putting away books, clearing book returns, answering questions and helping run the online chat on the libraries page of the K-State website.

“I’m very passionate about working here,” Bowers said. “I really want to help everybody and make them love libraries as much as I do. It’s a hard thing to do, but I’m just so happy I’m working here and that I could get on board as early as I did.”

Hale has 3 million books that are mostly kept at a warehouse by the airport, and on the third and fourth floor of the library, according to Bowers.

“People walk in, and they’re like, ‘Is this the library?’” Bowers said. “I still can’t pinpoint an exact book location. We always tell people that finding books is all about having the call number and the stacks guide. We have librarian professionals on every level, but most of them work behind the scenes and aren’t on the floor, but they know so much.”

Charissa Powell, undergraduate experience librarian, works behind the scenes and said she enjoys interacting with students and sharing her vast knowledge of the library with them.

“I love working with students,” Powell said. “They are the highlight of my job. Whether that’s helping someone during a shift at the reference desk, one-on-one during a research consultation or giving tours.”

Powell said she believes everyone has a place at the library, and they should never be ashamed in asking for help.

“If you ever have questions about finding a book on the shelf, ask the students at the second-floor Help Desk,” Powell said. “They are the nicest, friendliest people. I myself have struggled with finding a book before, so there is no shame in asking for help.”

According to Bowers, she and Carr aim to have the same knowledge that Powell has one day as they continue to keep the library active and inviting for other students.

“If we can’t find something for someone, we’ll find someone who can,” Carr said. “We have unlimited resources. There is usually always an answer and there are no such things as stupid questions.”

The librarians at Hale are always working to improve the library, Bowers said, whether it be renovations on the first floor or by researching the latest books to help students.

“I want to be able to answer some of the hardest research questions that students ask, but I’m not at that level yet,” Bowers said. “We get trained well and we get a lot of practice and I can’t wait to be at that point. I want people to see how amazing libraries can be, for studying, for research and for learning something new.” 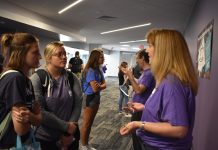 Board Games Day invites public to make a move at Hale...