Following a year of tuition and fee caps at universities in Kansas, Gov. Sam Brownback announced a cut of $17 million to higher education.

The announcement came after the state’s Department of Revenue announced that February’s tax receipts fell $53 million short of estimates.

K-State students received an email about the budget cuts Tuesday evening from the Division of Communications and Marketing.

“Today, Gov. Sam Brownback issued a 3 percent callback in state general funds for all state universities totaling $17 million,” the email statement said. “The callback will be about $4.9 million for Kansas State University.”

“This is an economic problem, not a tax policy problem,” Brownback said in a written statement. “Our tax policy has been instrumental in creating more than 80,000 jobs since we took office and has resulted in a record number of Kansans working.” 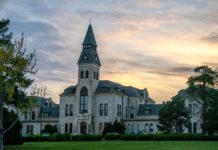