“State of the art” food preparation, mezzanine dining, a “grab-and-go venue” and outdoor dining are all features students living in the residence halls will see in the newly renovated Kramer Dining Center in the 2016-17 school year, according to Division of Facilities’ website.

Along with this, a new meal plan will be enacted in Derby and Kramer dining halls featuring longer hours and the option for an all-access meal plan, Jessica Perrault, Department of Housing and Dining Services manager, said.

“Wefald Hall is opening up, so there’s going to be a new Kramer Dining Center,” Perrault said. “It’s going to look a lot different. It’s not going to be the normal line that students go through. There are going to be stations open all day and so they’re doing a new all-access meal plan to help with that.”

Instead of students initially choosing to purchase 10, 15 or 20 meals a week when signing up to live in residence halls, students will choose between the options of 14 meals a week or an all-access plan, according to the “Rates and Meal Plans” page of K-State’s Housing and Dining Services’ website.

“It’ll be fairly similar to what we have now,” Perrault said. “During usual meal hours, it’ll look similar with all the stations open so people can get through and get fed, but then during nontraditional meal hours, there will be just a few stations open for people to grab something to eat or they can sit down and study while they’re there.”

Perrault said students employed by the dining halls can continue working there, even with the extended hours.

“As far as labor and employees working there, they’ll have more employees working during those high meal times, and then we’ll just employ a few students to manage the few stations there the rest of the time,” Perrault said.

Next year, students who choose the unlimited plan will be allowed unlimited swipes, which will give them access to eat at the dining hall as many times a day as they want. Students who choose this option, which costs $315 more than the 14-meal plan, will also be given five guest passes, five pizzas during closed hours, one meal at JP’s Sports Grill and a 5 percent retail discount each semester, according to the website.

“We know students really enjoyed those aspects of the previous meal plans — that they can have to-go meals and late-night options — so we wanted to have a way to include those,” Perrault said. “That’s why they can have 75 to-go options. Since we’re open all day, people won’t have to dash, and so we’re taking away the dashing program and we’ll have a section where students can come in and take a pre-made meal to be able to dash with.”

With the new dining plan, there will also be changes to the way students swipe in for meals, according to Perrault.

“Because it’s going to be open all day, we’re changing to a new card-swipe system,” Perrault said. “Instead of card swiping, we’re going to do ID printing. We’re piloting it right now so it’s not a for sure thing, but we’ll have to do something besides card swiping.”

Emma Ware, freshman in athletic training, said she likes the idea of ID printing, which would require students to use their fingerprint instead of an ID card.

“It can be an easier way than swiping an ID card, and people wouldn’t be able to steal ID cards because it’s a fingerprint and unique to the person,” Ware said. “It’s also on you at all times, so you don’t have to worry about brining your card to eat.”

Perrault said she is looking forward to the new food preparation plans.

“I’m super excited to visit the new dining center because it’s going to look so much different from Van Zile, Derby and the old Kramer because it will be new and it’ll have different line options where they’re cooking to order,” Perrault said. “Right now, we pre-make items and then the students select what they want. But now it’s going to be backwards, where they select and then the student will be preparing the meal for them.”

Jessica McCollum, freshman in social work, said she is excited for the all-access dining plan.

“I’m excited to be able to have the option to get food whenever I want,” McCollum said. “If I feel sick, I can go down and get ice cream. I don’t have to pay to go get something at a convenience store, I can just use my meal plan.”

McCollum also said the longer hours will be helpful for students who may miss the standard hours in place now.

“I’m excited for the extended hours because it’s not really possible to miss a meal anymore,” McCollum said. “I’m intrigued to see the changes that will be taking place.” 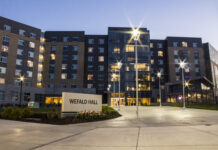 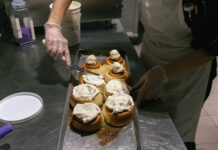 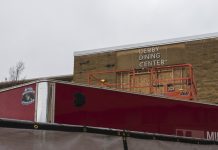