Marco Rubio made stops in Topeka, Wichita and Overland Park, Kansas on March 4, 2016, just a day before the Kansas caucuses. At his Topeka rally, Rubio discussed his stance on gun control, woman’s rights, boosting benefits for veterans, family values and discussing his family’s hard-working beginnings in Florida. During his speech, Rubio stated the need for educating young people so that America would be able to compete in a globalized economy. Rubio ended his rally by stating that the 2016 election is the most important election of the current century. Following brief closing remarks, Rubio departed to his rally in Wichita.

After arriving in Wichita, Rubio greeted several hundred people, talking about repairing America, building up the young generation, entrepreneurship, backing veterans and voting for him on Super Saturday in the Kansas Caucus. 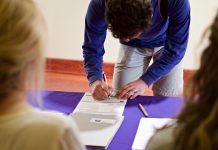