K-State is currently ranked second place in the Big 12 in the third week of RecycleMania, an annual university recycling competition.

The University of Texas leads the Big 12. Overall, K-State is ranked No. 99 out of 187 competitors. The competition began Feb. 1 and will continue through March 30.

RecycleMania is a competition dedicated to promoting waste reduction activities to college campuses and their communities.

Bill Spiegel, program manager for K-State’s recycling program, said that within the first three weeks of the competition, K-State collected 112,701 pounds of recycling with a weekly recycling rate of 31.89 percent.

Spiegel said he encourages students to participate in the competition.

“Our motto is one-stop drop,” Spiegel said. “We can’t make it any easier for K-State students to recycle.”

Many K-State students participate in the contest on a daily basis and have adopted a “go green” mentality in their everyday lives.

Brad Hess, senior in marketing, said he thinks recycling can make a big difference in the world.

“I started recycling anything I could in elementary school,” Hess said. “Our planet and its longevity is very important and everyone should do their part to help.”

According to the RecycleMania website, results are determined by a weekly report of the amount recycled and trash collected. Universities and colleges participating are then ranked in categories based on who has the greatest amount of recycling on a per capita basis as well as the best recycling rate as a percentage of total waste.

Spiegel said his goal with RecycleMania is to continue to improve each year and to see a constant growth in K-State’s recycling rate. This goal is driven by his motivation to make recycling convenient for students and faculty.

“The goal is to raise awareness year-round and not just for the tournament,” Spiegel said.

Cali Kowalski, sophomore in marketing, said she appreciates the opportunity to get involved with recycling through her sorority as the recycling chairwoman.

“It was difficult to implement at first,” Kowalski said. “Once I made the recycling bins more accessible, I noticed more and more girls starting to recycle.”

K-State’s campus has more than 66 recycle bins outdoors and numerous inside the buildings across campus, according to K-State’s recycling webpage. They can be identified by their blue color, and anyone can participate in the RecycleMania competition by utilizing the blue bins around campus. 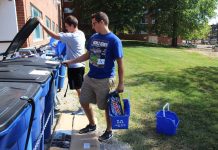