“I live in a retirement community,” isn’t something you typically hear from a college student. However, every year, this becomes part of the college experience for 11 students.

I am a sophomore working toward my bachelor’s degree in anthropology with a minor in mass communications. This spring, I am taking Associate Professor of Anthropology Michael Wesch’s Digital Ethnography class.

For the spring semester over the past four years, Wesch’s students have moved into Meadowlark Hills Retirement Community.

Before the first group of students moved in, Wesch gave a talk at Meadowlark and said while he was giving the talk he “realized there was a little community.”

My classmates and I moved into this community a few days before the spring semester started. None of us knew each other, and we were about to be roommates in a retirement community.

The first task at hand was furnishing our two apartments. There are six girls in the class, including myself, who share one apartment and four out of the five guys in our class share the other. I spent the first day moving in the furniture I had found at thrift stores in Kansas City while the rest of my classmates searched for couches and other necessities.

By the end of the weekend, we had managed to fit three beds in the one bedroom and had two air mattresses, a comfortable couch and a kitchen table set up in our living room. To us, the craziest part of our current living situation was the fact that six girls were sharing a one-bedroom apartment. To everyone else, it was the fact that six college girls were sharing an apartment in a retirement community.

Over the next few weeks, I spent the majority of my free time participating in activities at Meadowlark and getting to know the residents. I ate meals with the residents, played bingo with them and talked with them for hours as we played card games or watched some K-State basketball.

Every resident I meet is full of stories, history and wisdom. With each story, comes more curiosity and more questions I have for them. But, at the same time, they are curious about our lives.

Warren Walters, my friend and a resident at Meadowlark for six years, said his favorite thing about the students being here is “getting acquainted with (us).”

“I like to reminisce of the past history and play bingo with you guys,” Walters said.

Walters said the residents are glad to have us around, but it does not really change anything for them. For me, the conversations I have with the residents are changing the way I view older generations and how I view myself.

When the class first started, I expected to be interviewing a lot of residents about their lives. More often than not, however, I am simply having a conversation and telling stories with residents rather than interviewing them. As we have shared stories, mistakes and hopes for the future, I have built relationships that I will cherish and never forget.

I consider many of the residents to be my friends, but I also look up to them as mentors. They are always eager to listen to my stories and to give me advice if I ask for it.

In addition to developing a friendship, opening up to the residents and making myself vulnerable seems to make them more comfortable and willing to share the personal details of their stories.

Throughout the semester, I have realized that storytelling is an easy way to build relationships with both the residents and my roommates. At the start of the semester, I hadn’t thought of the friendships that would be made with my classmates.

Through late nights at Meadowlark and in Waters Hall working on projects, however, we have shared our lives and stories and have become more than just classmates. We are classmates, roommates and a small group of friends that treat each other like family.

Not only have we grown together as a class as we got to know each other and collaborated on projects, but I have also grown individually. I am becoming a better storyteller and anthropologist because of the projects we have had over the past two months.

Wesch said this class has “brought life back to (his) teaching.”

I think my classmates would agree with me that he is bringing life to our education. Rather than a typical semester full of lectures, I get to hang out with residents at Meadowlark and collaborate with an incredible team of students.

“This class is about the research and trying to dive into peoples lives,” Wesch said. “It’s about more than just knowing a bunch of stuff and applying techniques. Ultimately, good anthropology requires you to know yourself and nurture a depth of insight to tell good stories about what you discover.” 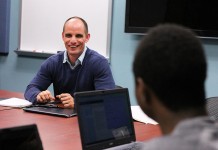 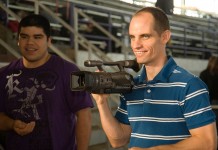