There is a big problem with voter turnout in this country. The last presidential election year saw a 17 percent voter turnout for the primaries, and 57.5 percent of eligible voters cast a ballot for president, according to the Bipartisan Policy Center.

In my opinion, this number is a direct representation of the complex process voting has become, not to mention that this process varies state by state.

The website fairvote.org article “Primary Elections 2016: Can you vote?” has a breakdown of the country, state by state, according to their laws regarding who can vote in primaries.

The most important of these, and one of many hoops Americans have to jump through to vote, are the open and closed rules. “Kansas has been updated to list both parties as having closed primaries. Unaffiliated voters are permitted to affiliate at the polling place but cannot vote in either primary and remain unaffiliated,” according to the article.

While it is possible to change party affiliation, there is a deadline, and most of the time it is months in advance.

Back in 2008 during the primary stage, Limbaugh encouraged his listeners to try and change their party affiliation to cast votes to derail the Democratic Primary, according to Los Angeles Times article “Rush Limbaugh directs his Operation Chaos against Clinton and Obama.”

While it seems to me that the rules for closed and open states are in place to stop outside forces such as Limbaugh, if the party you are registered for has no good choices, then a person’s only decision is choosing the lesser of evils.

The state of Arizona certainly has an interesting relationship with its political parties. The state has so many independent voters that it established a new system where the state government sends people the primary ballot to the party of their choice, according to the Yavapai County website for elections and voter registration.

I think this system is something more states should adopt because if your party isn’t putting forth responsible candidates, people shouldn’t have to feel that not voting is more responsible than voting for the least dishonest candidate. That would also save people from having to play pingpong between mailing lists, too.

Another hoop that American’s face — college students specifically — is the residency requirement.

For college students in Kansas, you can establish residency to vote if you sign a form stating your intent to live in Kansas after you graduate, according to the Brennan Center for Justice’s “Kansas Student Voting Guide.” Otherwise you have to go back to your hometown to cast your votes.

Another factor people have to consider when voting time comes around is their work schedule.

According to Kansas statutes, any registered voter may leave work “up to two hours or as much time as will add up to two hours when combined with nonwork time. (The) employer may decide when hours are taken, but it may not be during a regular meal break.”

Once again, this is different from state to state.

All of these are examples of the non-uniformity of voting laws in the U.S. The lack of structure makes voting rules hard to understand, while other practices make the process itself a hassle to the point of apathy.

Instead of voting being something to look forward to, it has turned into a circus act with multiple hoops to jump through just to get to the ballot box. 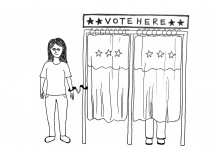 Calls for mandatory voting sign of bigger problems with elections

Calls for mandatory voting sign of bigger problems with elections