“We had all five guys under par today, but nobody was able to go low and that hurts when the course is playing as easy as it was,” K-State head coach Grant Robbins said to K-State Sports. “We just have to keep improving. We have to get much better at controlling distances with wedges, converting routine up-and-downs and learning how to score when you aren’t playing your best.”

Four of the five Wildcat competitors finished under par on the weekend. Junior Matt Green, who finished in a tie for 15th, recorded the best individual finish for the Wildcats. For the tournament, Green shot 7-under par. The next highest placed golfer for K-State was freshman Jeremy Gandon, who shot 3-under par for the tournament. Gandon is improving on his already impressive freshman campaign.

Up next, K-State will be at the Old Waverly Invitational April 4-5 in West Point, Mississippi.

The K-State women’s golf team finished in 11th place at 28-over par at the MountainView Collegiate over the weekend.

Junior Madison Talley shot the best for K-State and tied for fifth. She finished at 2-under on the weekend and recorded her third top-five finish this season. Talley, however, was the only Wildcat to finish under par.

Junior Katherine Gravel-Coursol was the next highest placer for the Wildcats at 24th place. She was 6-over for the tournament. Sophomore Connie Jaffrey finished her weekend at 8-over, which tied her for 34th place.

“It was a great finish by Madison in a strong field,” K-State head coach Kristi Knight said to K-State Sports. “Today’s round was an improvement from yesterday afternoon. We still had too many double bogeys.”

The Wildcats will look to improve on this for their next tournament, the SMU-DAC Invitational, in Mesquite, Texas, at the Dallas Athletic Club April 1-2. 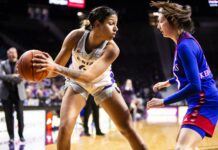