Mickey Losinski, 43-year-old assistant professor of special education, father and husband, painted a picture of his battle with colon cancer through the lens of a superhero.

Losinski said he compares himself to Deadpool, a superhero diagnosed with cancer who undergoes an experimental treatment that leaves him indestructible. Though Deadpool may be a fictional superhero, Losinski said he views his journey as a real story of perseverance.

“(Deadpool is) a big smartass and crazy,” Losinski said. “He has this experimental treatment, gets fixed and becomes indestructible. So I’m like, ‘Hell yeah, that’s me.'”

Losinski said he is open to sharing with others about his disease. He told one of his classes about how the new movie “Deadpool” reflects his own situation in a way.

“Deadpool is like my spirit totem, and I think people are getting really annoyed with me talking about it,” Losinski said.

Lisa Losinski, Mickey’s wife, said her husband is a man of many talents, with a passion for teaching, art and his family.

“The first time I walked into their house, there were pictures on the walls of the kids that he’s painted,” Brenn Cravens, former nanny for the Losinski family, said. “There was a big picture of Oliver and Eliot right when I walked in. He’s an amazing artist.”

Mickey is originally from Oregon, where he received his Bachelor of Arts in graphic design from Southern Oregon University, Lisa said. He received his Master of Fine Arts in sculpture from Washington State University. He then taught in Florida, where he met Lisa.

Three years ago, the Losinski’s moved their four children from South Carolina to Manhattan when Mickey took a position at K-State as an assistant professor of special education, Lisa said.

In December 2013, shortly after arriving in Manhattan, Mickey was diagnosed with colon cancer. This began the process of several surgeries and six months of chemotherapy, Lisa said.

The cancer was removed, but they knew there was a 30 percent chance the cancer would come back in two to three years; in the meantime, Lisa said they put the diagnosis behind them.

In November 2015, the family of four became five. One month later, eight days after purchasing a new home and three days after Christmas, Mickey found out his colon cancer had returned.

Without the surgery Mickey had in February, his chances of living five more years would have been less than 10 percent, Lisa said. Now, his chances are increased to 55 percent.

“He’s young and since he probably can recover from something like that, we are looking for more time,” Lisa said.

Mickey said after the current surgery route, chemotherapy is to follow.

While juggling being a professor, father and husband, Mickey said trips to Mayo Clinic in Rochester, Minnesota, will become frequent and expensive as he undergoes treatments for his cancer. He said he has received a lot of support, including a time when his department chair coming to his home to shovel his driveway.

“My faculty, my (department) chair, the department here, is awesome and so supportive,” Mickey said.

Mickey also has a GoFundMe page to help with medical and travel expenses, which he said has raised more funds than he expected.

“With the GoFundMe page, I was hoping for just enough to pay for the next plane ticket to go up to Mayo, but we received much more than we anticipated,” Mickey said. “It will pay for this trip but we are going to run through it as more trips come, but we will figure all that out when it comes. Again, I only think about what’s right in front of me.”

In one month, approximately $20,000 was raised to help alleviate some medical expenses, according to the GoFundMe page.

“All the friends and support here has been overwhelming,” Mickey said. “So many people here, from Clemson and other colleagues have helped. You don’t know that’s gonna be the case anywhere else. I just have to focus on, ‘What do I need to do right now?’ and not worry about the future because it’s going to sort itself out. It’s a marathon, not a sprint.” 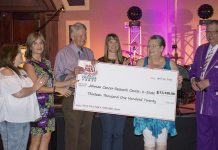