It’s a choice that the many of us will be facing at the end of the school year. We have to choose where we will be living during the next academic year, be it in the dorms, an apartment or a house.

Take me for example. I have attended K-State for almost four years, three of which I lived in the dorms.

Because this is my last year at K-State, in addition to my first year in an apartment, I would like to give my two cents on dorm living in comparison to expectations about dorm life itself.

The first aspect of dorm life I want to discuss is the community of dorm life, or how well people interacted and socialized in dorms.

I personally think the aspect of community in a dorm is the best selling point for dorm life. I made many friends in the dorms during my time there, and I am still in contact with a bunch of them. Oh how I remember the laughs, philosophical discussions and fun times I had with my dorm-mates during the three years I spent there.

The community aspect of the dorms is an essential part of the college experience to meet new people and to enjoy your time with them.

However, “you won’t have much luck studying if friends stop by every few minutes,” according to the seattlepi.com article “The disadvantages to staying in dorms.”

While dorm life can be fun and help make some good friends, I would recommend getting your priorities straight when it comes to socializing versus making good grades while living in the dorms.

Even space can have an impact on the social aspect of dorm life, as being jammed into a room with one, two or even three people for a whole year can force dorm students to adapt to the socializing environment.

Plus, having communal bathrooms can be a tad awkward if you aren’t accustomed to that sort of thing.

“Even students who grew up sharing bathrooms with siblings might find the idea of sharing with strangers a bit unnerving,” according to the Stanford.edu article “Pros and cons of dorm living.”

Probably the only issue I had with the dorms was the fire alarms. I know this will seem incredibly petty, but for me the biggest problem was the times at which fire alarms were scheduled to go off. I’m sure that some complex scheduling went into the whole timing for it, but they always went off at the worst times.

Trying to get a last-minute assignment in? Nope. Instead you have a thirty-minute delay from sitting outside waiting for a drill to be finished. In the middle of a shower before bed? Have fun drying off outside while waiting to be let back into the dorm.

Sure, dorm life is something to get adjusted to, but if I could survive it for three years then it can’t be that bad.

For anyone interested in spending another year in the dorms, I’d say to give it a shot because who knows what experiences will be in store should you decide to roll the dice on dorm living again. 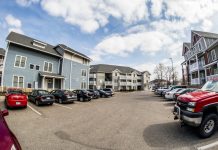 Helpful Hints: Hacks to finding a place to live, what to look for when renting

Larger than life: Kansas’s largest pumpkin makes its way to the...