Home Sports Men's Basketball A look at the Final Four

This year’s Final Four is interesting to say the least. From high-ranked blue bloods to top-of-the-class mid-majors, to a team with a superstar, to a sleeping giant suddenly awakening, the storylines surrounding the Final Four are fascinating and diverse.

Not many people outside of Syracuse, New York, had faith in the Syracuse Orange to make it to this point in the tournament, but here they are.

A lot of experts did not believe Syracuse should have made the tournament to begin with because head coach Jim Boeheim was suspended for nine games during the season. This made Boeheim seem like a snake since he was suspended for failing to keep track of the academic process of his players for the last decade.

CBS analyst Doug Gottlieb said Syracuse should not have made the tournament just because of losing to St. John’s.

Nonetheless, Syracuse is in the tournament and there is nothing anyone can do about it. It will be a long shot for the Orange make it to the national title game as a No. 10 seed, especially with their ACC foe, the North Carolina Tar Heels, standing in their way.

North Carolina is the only No. 1 seed left in the tournament. The odds are on the Tar Heels to win the title.

What makes the Tar Heels the favorite is that they have one of the best guards in the country, senior Marcus Paige, who has played lights out so far in the tournament. On top of this, North Carolina has one of the best bigs in the country, senior forward Brice Johnson. Johnson is averaging in the double digits this season with 17 points per game and 10 rebounds per game.

Tar Heels’ head coach Roy Williams has the most national titles of the remaining coaches, giving him the advantage of knowing how to win the big game. Many factors point to why you should think North Carolina is going to win the title, but in the NCAA Tournament anything is possible.

Villanova has the most marquee win out of the Final Four teams to this point. This win was over the No. 1 overall seed, the Kansas Jayhawks. If you ask Kansas fans, they were unlucky in getting the Wildcats as their No. 2 seed. Up until they defeated Miami in convincing fashion, I would not have thought of Villanova as a threat to Kansas. The Wildcats proved a worthy opponent while making it to the Final Four.

Everyone in Big 12 territory knows how good senior guard Buddy Hield is, but Hield has proven just how good he really is to the national audience during this NCAA Tournament. In this tournament, the Sooners have regained form from early in the season when they looked unbeatable. When senior guard Isaiah Cousins and junior guard Jordan Woodard are playing on Hield’s level, the Sooners are nearly impossible to beat.

Oklahoma has a challenge against Villanova, who they defeated earlier this season with ease. Neither team is the same, however. Villanova head coach Jay Wright is a very good coach, but Oklahoma head coach Lon Kruger wins everywhere he goes. He is simply one of the best coaches who has never won a national title. If it’s a close game down the stretch, the edge has to go to the Sooners.

At the end of the day, only one team will be smiling when the new “One Shining Moment” song plays after the title game. For the Big 12’s sake, let’s hope Oklahoma is that team. 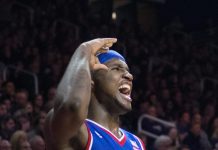 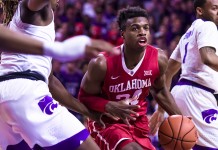 What to Watch: Final Four

What to watch: Tar Heels, Mountaineers have huge week ahead of...