Nancy Landon Kassebaum Baker, a former U.S. senator, spoke to an audience of 100-150 K-State faculty, students and Manhattan residents about the complications in modern politics and how women’s roles in government are more vital than ever. The K-State’s Women’s Studies Department hosted its 2016 Women’s History Month dinner and speech at the Manhattan Country Club Thursday.

Born in Topeka, Kassebaum Baker graduated in 1954 with a bachelor’s degree in political science from the University of Kansas. She later received her master’s degree in diplomatic history from the University of Michigan. In 1978, she became the first woman from Kansas to serve as a U.S. senator and the second woman nationally to serve without being preceded by a husband, though her only other political experience was as a member of the Maize school board in Maize, Kansas.

“Sometimes I think the school board was harder than the United States Senate,” Kassebaum Baker said.

Kassebaum Baker said she sees a change in politics that altogether halts compromise between the two major parties today, a change that has a occurred since her time in office.

“I’m more sad than angry because I believe both parties have sunken too low,” Kassebaum Baker said. “There’s no leadership willing to reach across the aisle.”

To change the course of vindictiveness and divisiveness of politics today, Kassebaum Baker said that women have the responsibility and ability to be good negotiators, pull diverse views to convergence and lead the way in saying “enough is enough” at local, state and national levels of government.

“I think women have always been the backbone of our republic,” Kassebaum Baker said.

Kassebaum Baker said women like Abigail Adams, Carrie A. Nation and Clarina Nichols have shown that women have the ability and power to be a true force of change in political processes.

“The current political spectrum is so divisive,” Stefani Schrader, K-State alumn, said. “(Kassebaum Baker) cuts to the core of the real issue without pandering sides.”

Kassebaum Baker, a former Republican senator, typically voted in alignment with Republican views on defense and budget but swayed from her party on issues such as a woman’s right to have an abortion and gun control during her time in the Senate.

Kassebaum Baker said women are the key component in changing the paradigm of dishonesty and the “tear things up” mentality in politics.

“In whatever we’re doing, it’s the heritage we leave behind that matters,” Kassebaum Baker said. “Women have a responsibility and an ability to lead on the path to a more trustworthy way.” 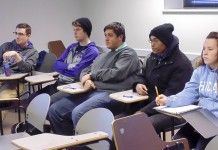