“There is too much divisiveness in American politics,” Snyder said at a press conference at the Vanier Football Complex Thursday. “We need a leader who understands the meaning of family. The opportunity for the greatest turnaround in American political history exists here today, and it’s not one to be taken lightly.”

Snyder said he is running as a Republican, hoping to be the winner of a potential brokered convention by the party this summer.

“I hope the delegates will choose me at a brokered convention,” Snyder said. “I don’t think the American people can take much more of the nastiness in politics.”

Snyder, who has twice turned around the football program at K-State, said he is up for the challenge of turning around the U.S. economy.

“We wouldn’t have a football program without Coach Snyder,” Jon Wefald, former K-State President, said. “I doubt we will have a country much longer if we don’t elect this man president.”

Snyder said his experience as coach has prepared him to lead the country. His campaign platform consists of his 16 Goals for Success.

“We don’t need four and five-star recruits for politicians,” Snyder said. “We just need hardworking people who want to play as a team. We need a government of integrity.”

Snyder will continue as the head football coach for K-State, but said he will delegate more responsibility to his assistant coaches, including his son, Sean Snyder.

“I’m happy the K-State family can share Dad with the rest of the country,” Sean said. “We assistant coaches are here to help him coach and campaign. That’s our job, and we’re ready to step up.”

Sean said he has confidence in Bill’s ability to juggle being a coach and president.

“My father never quits,” Sean said. “He doesn’t sleep much anyway, and one Taco Bell bean burrito keeps him running forever. Sometimes I joke that he runs off gas.”

Snyder has already begun to pick up endorsements.

“I’m voting for my good friend Bill Snyder, of course,” U.S. Sen. Pat Roberts said in a video released by the Snyder campaign. “He is as good as it gets for this country.”

Bill said he is the right man for the job.

“I can unite this country, this family,” Bill said. “Every man a wildcat.”

For last year’s fun check out our article on Collin Klein. 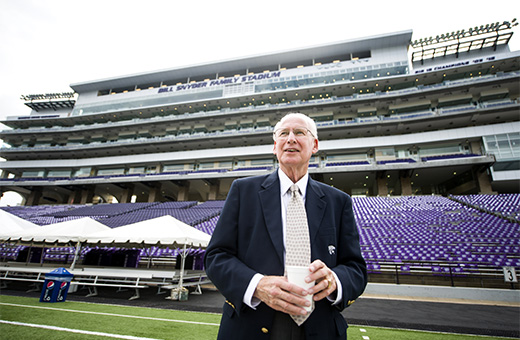 Bill Snyder is in familiar territory in Arizona