I remember the changes between elementary school and high school. They were slow and subtle, until they weren’t.

At the bottom of our stairs, my mother was begging the intimidating man at the door to give her two weeks to come up with the money. If they took her car away, she wouldn’t be able to get to work. I’m not really sure what would have happened then.

My parents worked effortlessly to shield my sister and I from the harsh realities our family was facing in regards to finances.

It wasn’t until I watched my mother beg another person for something in her own house that I realized how naive I had been all along.

I, like so many others, had feared the perpetual state of poverty that plagues our society. I realize now that I was one of the lucky ones — I got out.

“The longer a child lives in poverty, the tougher it can be for them to climb out later in life,” Jason Breslow said in the Public Broadcasting Service article “By the numbers: Childhood poverty in the U.S.”

This I believe to be true; however, an important element missing from this statement is the relativity of poverty when it is affecting children.

Economics, education, health and family are four elements that play a role in the well-being of a child, and they are all affected in some way when you add a low income into the mix.

From 2008 to 2013, there was a 4 percent increase in the number of children living below the poverty line in the U.S., according to the Annie E. Casey Foundation’s 2015 Kids Count Data Book.

This increase, along with the stigma that the cycle of poverty is endless, shows an alarming trend that I feel is being ignored.

Poverty can look different in many situations, and it is how you grew up that shapes your perspective on what poverty is. This is where the problem starts.

Depending on your situation, your basic needs for living will vary. I may need eight hours of sleep every night to function well the next day, whereas someone else might be okay with just five; the same idea applies to poverty.

In the research study “Poor children ‘know their place’: Perceptions of poverty, class and public messages” in the Journal of Sociology and Social Welfare, 24 children between the ages of 5 and 12 were interviewed using pictures of two homes from different economic levels.

“The notion that poor children are not bothered because they live among other poor people and are therefore not aware of their common losses and distresses is inaccurate,” Weinger said.

When asked how the family in the low-income house lived, one of the children in the study said, “They might not have a lot of food because they gotta pay for the house payments and stuff,” according to the article.

For children in poverty, this way of living is the only life they know. While they do understand the opportunities they are losing by being impoverished, there is little they can do to remove themselves from the situation.

“My children play on a tablet (computer), that’s a pure income effect, nothing to do with me as a parent — I’m not in the room,” said Andy Dickerson, co-author of the research presented in The Guardian article “Poverty has two-fold impact on children’s ability, says study.”

Although these comparisons are on completely different spectrums economically, it shows the inequalities our society encompasses on a daily basis.

The child from the low-income family understands poverty to be his normal, while the other child understands it to be a foreign way of living.

This unequal playing field that has been accepted by society has aided in the creation of the cycle of poverty.

“Poor children are more likely to become poor parents,” according to the “Ending Child Poverty” page of the Children’s Defense Fund’s website.

This is a bigger problem than some people may realize, and it all comes down to opportunity.

Education is such a large component in early childhood development, yet this is where we are making the biggest mistake.

“Under-resourced schools in poorer communities struggle to meet the learning needs of their students and aid them in fulfilling their potential,” according to the “Effects of poverty, hunger and homelessness on children and youth” page of the American Psychological Association’s website.

Children across the U.S. run the risk of living in the perpetual state of poverty because our society has failed in providing them with the same opportunity to learn and excel as a result of their parents’ low income.

I think the environment you grew up in teaches you what normal is. Can you imagine the amazing things children would be able to do if everyone’s normal was a good education, stable economics, adequate health and a happy family? 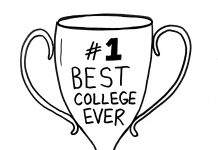 OPINION: The long unnescessary march towards raising the minimum wage