Spoon University, a collegiate website organization that serves as today’s generation’s resource for all things food, is setting out to unite K-State students over their love for food, Taylor Egan, community manager for K-State Spoon University and sophomore in hospitality management, said. K-State’s Spoon University’s website will officially launch this week and should be live by Friday, Egan said.

“I found out about Spoon University through Snapchat,” Egan said. “I learned more about it and wanted to start a chapter here at K-State, so that’s what I did.”

Spoon University was originally created by two college students at Northwestern University, Mackenzie Barth and Sarah Adler, who decided that students “do not actually need to gain the ‘freshman 15.'” Since its launch in 2014, Spoon University has grown to over 120 campuses across the country, according to its website.

“Our chapter of Spoon will publish content written by K-State students,” Topanga McBride, social media manager for K-State Spoon University and sophomore in agricultural communications and journalism and economics, said. “It can be recipes, dining hall hacks, places to eat in Manhattan — basically, anything and everything food-related that might interest our students.”

Spoon University is also partnered with Food Network and Buzzfeed, Egan said. They pick up content from chapter websites and share it on their own sites, according to the Spoon’s website.

“Spoon is a great opportunity for students who want to get experience in writing, event planning or social media,” Egan said.

Egan said Spoon University meets at 6 p.m. every Tuesday in Justin Hall for students who want to get involved in the organization.

“We have a small chapter right now, but in the next year we hope we can recruit a lot of passionate students,” Egan said. “The best part about this organization is that we can all bond over something we love: food.”

Spoon University is open to all, and anyone can join regardless of their skill, McBride said.

“It is a great way to improve your own skills as well as get experience at a national level,” McBride said. “Food brings us all together, and that is what Spoon is all about.”

Jacob Weber, sophomore in hospitality management and member of Spoon University, said he left K-State in the spring of 2013 to be on the MTV reality cooking show “House of Food.” After the show ended, he said he spent three semesters in culinary school at Johnson County Community College and has since returned to K-State.

“Spoon is just another way to meet cool people and grow your skills in the kitchen,” Weber said. “I like the idea of Spoon because it’s a bunch of like-minded people who love cooking, eating and improving the way college students think about food.” 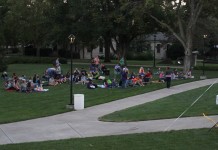 Students: take a break, get some fresh air today

Students: take a break, get some fresh air today