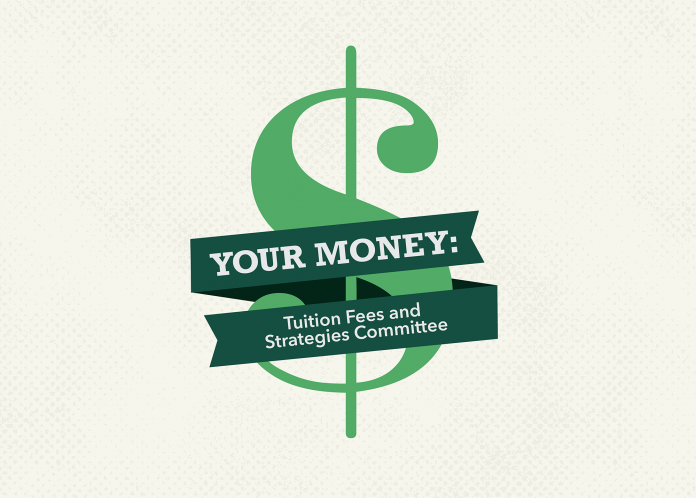 Two separate demands of Kansas politics are the reason for a $30 per-credit-hour fee increase proposal for the College of Engineering. This is according to Darren Dawson, professor and dean of the college, who spoke at the Tuition and Fees Strategies Committee meeting Tuesday.

The college’s fee proposal was originally $15 per credit hour for next school year, which would be used by the college to meet the requirements of the Kansas University Engineering Initiative Act.

But with President Kirk Schulz’s 2 percent budget callback on Feb. 19 and Gov. Sam Brownback’s 3 percent cut to higher education funding announced March 1, the college proposed an additional $15 fee on top of the $15 fee increase for next year to keep the plan on track.

If the fee proposals are not approved, the college’s accreditation may suffer, Gary Clark, professor and associate dean of the college, said.

“We had to do some scrambling after that last visit in 2011 to get that weakness resolved,” Clark said. “But I guarantee you when (the accreditors) come back next year, if we’re out of balance again, it’s going to be bad news.”

The five-year fee plan was the college’s response to the University Engineering Initiative Act, a 2012 Kansas law intended to increase undergraduate engineering degrees in the state.

As part of the law, the state will fund $105 million over 10 years to K-State, the University of Kansas and Wichita State University, the three state universities that provide undergraduate engineering degrees.

In his presentation to the committee, Dawson said K-State’s goal with the law was to grow undergraduate enrollment in the college from 2,900 to 3,800. As of fall 2015, Dawson said there were 3,666 students.

While enrollment at K-State as a whole has decreased by 608 students since fall 2014, Dawson said the college’s enrollment was up 156 students.

To meet the demands of the additional enrollment, 35 new faculty are required. According to the fee proposal document, seven new faculty will be added every year. The first seven will begin teaching this fall.

The original $15 per-credit-hour fee increase plan would cover the 26 faculty. The additional $15 per credit hour in the proposal for next school year would cover the budget cuts, which Dawson said was necessary to continue to meet the requirements of the University Engineering Initiative Act.

The budget cuts would be difficult to absorb, Dawson said, because 94 percent of the college’s budget go toward faculty and staff, leaving little room to make cuts.

The accreditation problem is that there are not enough faculty for the number of students, Dawson and Clark said.

April Mason, committee member, provost and senior vice president, said the fee proposal is not to enhance the education, but to improve the base program.

“This is not the whipped cream and the cherry,” Mason said. “This is the ice cream. You’re hearing accreditation issues. You’re hearing class size. That’s not an enhancement, that’s the actual program.”

K-State vs. the competition

“Our costs are not out of whack compared to other students in other states,” Dawson said.

Dawson said that according to the latest U.S. News and World Report rankings, both KU and K-State rank 70th for their undergraduate program’s, but K-State’s graduate program ranks 94th while KU’s ranks 90th.

“It’s important for us that we don’t let KU get out in a place where their reputation is substantially better than us according to the U.S. News and World Report because people do use that to make a decision,” Dawson said.

“We believe the K-State alumni, faculty and staff, and students deserve the best engineering program in the state of Kansas, and bygone that’s what we’re going to do,” Dawson said.

Dawson said the job market for engineering majors is strong throughout the country and the return on investment is high, so the increased costs would be unlikely to deter students from enrolling in the engineering program.

Students on the committee asked if increasing need-based scholarships could help offset some of the additional costs to students.

Clark said there is a $400,000 fund for first generation student scholarships, but it is difficult for the college to increase financial aid for students. Currently, the $36 million endowment generates about $1.6 million per year, but the scholarship bill is over $2 million, Clark said.

Part of this is because more than half of Putnam Scholarship students are engineering students, Clark said. Financial aid commitments for engineering Putnam scholars is about $1.43 million.

“We’ve had tremendous success in attracting great students in the College of Engineering,” Pat Bosco, committee member and dean of student life, said.

Clark said it is a good problem to have, but there is not enough scholarship money to cover the commitments.

Students and faculty have both been engaged by the college for feedback on the fee proposal.

Dawson said over the course of several meetings, which had an average attendance of 75-150 students, students were informed about the fee proposal.

Jordan DeLoach, committee member, SGA senator and senior in computer science, said he attended the meetings and asked students to email him with their comments, but he didn’t receive any.

“The fact that I saw no one taking initiative to say ,’Hey, I don’t agree with this,’ I found to be telling,” DeLoach said.

Jack Ayres, SGA senator and senior in chemical engineering, attended the meeting and said he doesn’t think “positive” and “negative” apply to students’ opinions on the fee proposal.

“Nobody is positive toward increased fees,” Ayres said. “Nobody is excited about paying more fees, but I do think there is a pretty unanimous voice that was positive that the plan was necessary … It’s a very unfortunate reality.”

Several members of the committee said they were concerned about the additional fee increase to cover the budget cuts. The opposition included discussions that no other colleges are using this method to cover the cost of the cuts.

“I do see the need for new faculty, so I would probably support the $15,” Emily Beneda, committee member and senior in food science and industry, said. “But I understand everyone is facing this 3-5 percent budget cut but no other college said that they’re going to use this fee to backfill for that, but I also understand that if there is no other source of revenue, it’s really hard.”