Jena Goebel, freshman in elementary education, did not allow a concussion to knock her out of the competition for a spot on the K-State cheerleading squad in May 2015.

During Goebel’s warmups for K-State cheerleading tryouts, she suffered a hard blow to the head. Unaware of the concussion at the time, the trainer told Goebel that she could either complete the tryout that day or come back in roughly a week to complete it, Goebel said.

Goebel made the decision to push on. Despite her head injury, that decision paid off, Goebel said.

“Somehow I still made the team,” Goebel said. “It was a miracle.”

Although K-State gameday involves lipstick, fake eyelashes and groomed hair for the female cheerleaders, not all of their work is glamorous, Goebel said.

“You’re like running a marathon and trying to look cute at the same time and trying to also pay attention to the game,” Goebel said.

Her experience as a K-State cheerleader did not fail to present her with struggles early on.

During the 2015 football season, just a few months after her first concussion, an accident while cheering resulted in another concussion. Goebel said she had to miss classes and practices for a month; setting her behind academically and athletically.

As a first-semester freshman, Goebel said she was still getting acquainted to college-level coursework during the time of her injury.

“It was a transition of learning how to study and then trying to play catch up once I was allowed to study again,” Goebel said.

Like before, however, Goebel did not let her injury stand in her way. According to her teammates, she continued to encourage them and keep a good attitude.

“She was at every single practice even with her concussion,” Martika Chappell, senior in family studies and human services and teammate of Goebel’s, said.

Goebel said her mother encouraged her to quit cheerleading out of fear of another concussion, but Goebel was determined to finish the season.

Once Goebel was cleared to practice with her team again, she said her biggest fear was not getting injured, but letting her team down by how far behind she had fallen.

“It was almost like I was taking three steps back from the progress I had made,” Goebel said.

Goebel impressed her teammates with her hard work and perseverance rather than frustrating them, Justin Staab, senior in kinesiology and teammate of Goebel’s, said.

Staab said Goebel handled her situation in the best way she could.

“When she came back, she worked her butt off and got back to where she used to be,” Staab said.

Goebel said in addition to games, the cheerleaders put in several hours of weights, conditioning and practice, occupying nearly every evening of their week.

“It’s definitely time-consuming,” Goebel said. “I remember coming back from practice, getting home at like 10 o’clock and just laying on the floor not even wanting to do my homework. Just laying there like, ‘What am I doing with my life?'”

Goebel said she was willing to put in long hours in order to “make new friends and grow as a cheerleader, but more to grow as a person because of the commitment and the struggles that are presented.”

Juggling several responsibilities between school, cheerleading and her sorority can be overwhelming, Goebel said, but what keeps her going is the reminder that she is living out hundreds of people’s dreams, including her own, by being a cheerleader for a Division I school.

“I tell myself that I was given the privilege and the honor to be on the team so I am going to give it all that I’ve got,” Goebel said.

“I thought it was stupid,” Goebel said. “Then I ended up actually enjoying it.”

Goebel said she enjoyed it so much that she decided to continue her cheerleading career at the collegiate level. Her first game was a rush of emotions.

The best part about being a K-State cheerleader for Goebel is the relationships that she has made by being involved in the program, she said.

Goebel said a favorite memory with the cheerleading team was the time when the cheer squad went out for frozen yogurt to celebrate her birthday.

“Because we’re forced together like every single day of the week, the extra time is a big deal,” Goebel said.

Although there are many skills involved, “the number one thing it takes to be a cheerleader is hard work,” Goebel said.

Despite the bumps along the way, Goebel said she has enjoyed her experience as a K-State cheerleader and it has taught her the importance of perspective.

“It’s all about attitude,” Goebel said. “Get your mind right and everything will fall into place.” 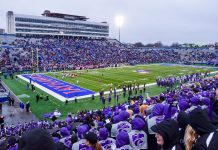 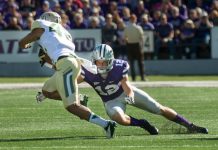