The 37th Annual Ed Chartrand Memorial Tournament featured both the K-State men and women’s club soccer teams. The tournament was held over the weekend at K-State’s Memorial Stadium, and games kicked off Friday night.

Andrew Franchett, men’s soccer club president and senior in management information systems, said he was pleased with the way his team played in the tournament.

“I thought our team played well this weekend,” Franchett said. “There were some great teams that came here to play and we competed hard, but sometimes this is the way soccer goes. Even though it was our last tournament, I’m proud of how we represented the university and our club.”

“I think we played really well overall,” Ragusin said. “There was a lot of competition at this tournament, but we represented ourselves and Kansas State well. Seven of the 12 teams traveled over 500 miles just to come compete here in Manhattan.”

The tournament is named after Ed “Fast Eddy” Chartrand, who was a member of K-State’s club soccer team from 1974-78, according to the KSU Ed Chartrand Memorial Tournament website. After Chartrand’s sudden death in 1979, Greg Middleton, a member of the K-State club team, asked his family if he could create a tournament in Chartrand’s honor.

Today, the tournament is not only a tribute to Chartrand’s life, but it serves to promote collegiate soccer across the Midwest.

“We are one of the finest and longest athletic traditions at K-State and in the Midwest,” Art Chartrand, president of the Chartrand Charitable Foundation, said in a K-State press release. “The tournament showcases not only incredible soccer action, but a chance to honor the WWI Memorial where we are fortunate to play.”

In addition, the Chartrand Charitable Foundation gives a $500 scholarship to one woman and one man playing on the respective K-State teams each year, according to the tournament’s website.

This year’s winners were Ragusin and Sierra Grimm, sophomore in kinesiology.

“My teammates nominated me for this scholarship, and it really meant a lot to me coming from them,” Grimm said. “I’ve had the opportunity to play with a great group of women and I’m very honored they chose me.”

Award recipients were recognized at a team reception on Saturday night.

“When I passed up on playing college soccer I thought I would never get a scholarship to play soccer, so to get this award means a lot,” Ragusin said. “I am very grateful for the kindness and generosity of the Chartrand foundation to present me with the award.”

It’s about more than winning for competitors in the K-State Super Smash Bros. tournaments 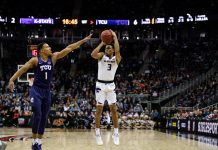 ANALYSIS: Injuries prove to be no problem for the Wildcats after beating TCU