Regardless of where we land on the political spectrum, we can all probably agree on one thing: Voting is critical to democracy. The U.S., however, has historically shown surprisingly low voter turnout in elections. Thus, there needs to be an integral change in the voting process to get representative election results.

In the 2012 presidential election, there was a decline in participation from 61.6 percent in the 2008 election to 58.2 percent, according to the “Voter Turnout” page of Fair Vote’s website.

To address these dismal voting statistics, where only around half of eligible voters actually vote, President Barack Obama has commented on the idea of instituting a similar system of voting to that of some other democratic countries: mandatory voting, which could have notable results if instituted here.

Though he has certainly not put forth any policy to make it a reality in the U.S., he has entertained the possibility of doing so, according to the Washington Post article “President Obama endorses mandatory voting.”

“Other countries have mandatory voting,” Obama said in the article. “It would be transformative if everybody voted — that would counteract money more than anything.”

The president then hinted at the idea that a considerable number of U.S. establishments aim to stifle the vote of namely minority and low-income citizens, altering the outcome of elections at all levels of government, admitting that the low turnout rates are often not the fault of the voters.

“The people who tend not to vote are young, they’re lower income, they’re skewed more heavily toward immigrant groups and minorities… There’s a reason why some folks try to keep them away from the polls,” Obama said in the article.

And he’s not wrong. There is a major issue of voter suppression in this country that seldom gets attention.

An example of this suppression can be seen as recently as last month in Arizona during its primary elections.

A 2013 Supreme Court decision “allowed Arizona to begin making changes without federal oversight” despite the state’s “history of discrimination against minorities in voting, according to the CNN article “Arizona Democrats call for probe into voter suppression claims.”

Voting changes made by the Republican officials responsible for this election cycle included drastically decreasing the state’s number of polling locations from 200 locations in 2012 to only 60, according to the CNN article. The justification for this was to “save money,” but it resulted in voter suppression in the forms of lines that took several hours to get through.

While there has been a request by the Arizona governor for a federal investigation, there has yet to be one, according to the CNN article.

With little legal backlash and seemingly countless ways public officials can stifle the vote, including voter ID laws, it is evident that there needs to be a change in America’s voting process, but is mandatory voting the best option?

Twenty-three countries currently have mandatory voting laws, but only 10 of those countries actively enforce them, according to the BBC News article “Australia election: Why is voting compulsory?”

The result of Australia’s most recent election was decided by “the highest civic participation in the world, with a reported 94 percent voter turnout in the last federal election,” according to the article. Australian citizens over the age of 18 who do not vote are subject to a small fine equal to about $18, and in more extreme cases, jail sentences, according to the BBC article.

However impressive mandatory voting may seem, it is not a realistic possibility in America.

American citizens are generally wary of any governmental policy that mandates their actions, as they are largely viewed as infringing on citizens’ freedoms. (Take gun control, for example.)

Another problem with having mandatory voting is having uninformed voters choosing the leaders in our country.

“Only about one-third of Americans could name all three branches of the federal government,” according to the U.S. News article “Ignorant voters are the problem.”

This is why the answer to increasing voter turnout is not found in instituting a mandatory voting system where citizens must vote, but in reforming policies that are really at fault for stopping the motivated voters who want to exercise that right. 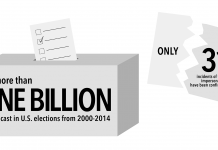