Ain’t nothing wrong with steak or sushi. Editor-in-Chief Jon Parton here along with Sports Editor Tim Everson on our never-ending quest to charge our bosses for our lunch bill.

This time we decided to check out Umi Japanese Steakhouse and Sushi Bar, at 900 Hayes Dr., to see if we could get a taste of Japan in the Little Apple.

Jon: If I ever want to appear classier than I really am to a date, I would go here. The large dining area, consisting of both dining tables and a hibachi grill area, is decorated in a mixture of Japanese-style artwork and TVs. I enjoyed the open space, but I knew the food would be the real test.

Tim: It’s definitely a nice place. Nicer than my shorts and pullover would have suggested. But it’s also approachable. Top 40 hits pervaded the air and various K-State football and basketball memorabilia filled some of the walls. This was a little out of place, considering the rest of the mostly posh decor, but it was certainly welcoming. I would probably dress up a little more on a return visit, but I definitely didn’t think that my shabbiness was looked down upon.

Jon: I’ve been fortunate enough to try a few steak and sushi places, and I would rank Umi’s food as one of the better ones. We started off with a chicken negimaki appetizer, which consisted of assorted vegetables in a cream cheese sauce surrounded by a chicken roll. The combination of both sweet and savory flavors with the texture of the meat was something I’ve never experienced before.

I ordered the chicken teriyaki bento box, which evoked a mixture of reactions from me. The chicken was a little dry and overcooked, but the roasted vegetables, prepared with a blend of spices, were peppery, citrusy and fantastic.

Despite my minor disappointment, I thought the overall dishes were well done and worth coming back for.

Tim: So Asian food in general centers a lot around seafood dishes, and Umi is certainly no different. Personally, I take after Bruce the shark and his company from “Finding Nemo” in that fish are my friends, not food. So, due to that, sushi (or any other fish dish) has never been my bag.

We started with a chicken negimaki roll, which was good. The chicken that it was all wrapped in was okay, but it didn’t do too much for me. I followed that with a house salad with a ginger dressing. The dressing had a nice citric tang, but overall the salad was nothing terribly special.

Jon: I didn’t really feel the food was outrageously expensive, especially considering comparable restaurants. The bill averaged out to be about $12 a person — not bad for those looking for a decent dining experience without taking out a loan to finance it.

Tim: While it maybe isn’t a spot for a single college guy to grab a quick bite to eat on the go, it definitely is classy enough for special occasions and affordable enough to not break the bank. 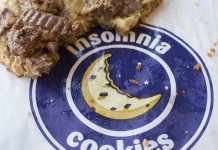 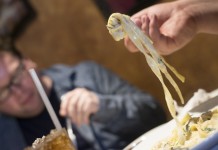 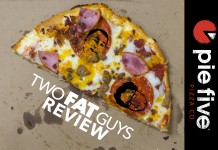