Tucked in the ally between Jimmy John’s and O’Malley’s Alley at 1214 Moro St., Sisters of Sound, owned by two K-State alumni, offers Manhattan a way to connect with music.

Sarah Cunnick and her sister Leah are co-owners of Sisters of Sound and opened the store in 2004. Sarah said Leah spends most of her time being the main caretaker of their elderly parents, but both help out and contribute to the store.

“Back in the early ’90s, I got a job at the record store down here called Street Side Records,” Sarah said. “I worked there until they closed up shop in 2001, and I didn’t know if I was going to be able to really do anything else. When they were leaving town they were like, ‘You should open up your own record store.’ I had all my own product ’cause I had been collecting records and CD’s for an entire decade.”

Sarah said she approached her sister about opening the store back in 2004 after they both agreed the town needed a record store. This November marks the 12-year anniversary of the store opening.

“We had coffee and donuts at 9 and we opened up the door at 10,” Sarah said. “We had some live, local and regional musicians come down and play. That was great, and they were fantastic. A lot of people don’t realize the quality of musicians that we actually have in this town.”

“My favorite part was just thumbing through all the records and looking at the crazy album covers,” Bailey said. “The atmosphere was pretty relaxed. There was a guy playing some country music and everyone was quietly searching through records.”

Hunter Gilson, graduate student in English, attended the event for the first time and said just getting to actually hold the records in his hands was the best part.

“I’ve always wanted to come out for Record Store Day, but this is also my mom’s birthday weekend so I usually travel back to Kansas City,” Gilson said. “Once I looked at what was being released and all the stuff that’s coming out for David Bowie after his death, it was kind of a no-brainer.”

For those who do not know much about vinyl records and the machines that play them, Sarah said she and other employees at the store are more than equipped to educate and help customers find something to suit their needs.

“We actually talk to people,” Sarah said. “We don’t just try to sell them stuff that they don’t need. I have all that information in my head so that when people do have these questions they can actually come to us.”

There are other events that Sisters of Sound host, such as in-house performances and something Sarah said she calls a “first-dibs party.” The party is when a big shipment of vinyl records comes in and a special event is held for the release of the new music. The next first-dibs party will include a large blues collection, Sarah said. 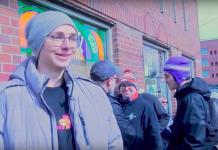 Channel 8: The first man in line on Record Store Day