Members of the K-State organization Feminists Igniting Resistance and Empowerment hosted a rally in Bosco Student Plaza Thursday from 11 a.m. to 3 p.m.

The rally is part of the National #AbortionPositive tour being sponsored by the women’s health organization Unite For Reproductive and Gender Equity and All* Above All.

At the rally, students could sign a petition to ask Kansas congress members to support the Equal Access to Abortion Coverage in Health Insurance (EACH Woman) Act, a proposed bill that would repeal the Hyde Amendment, which restricts the use of federal funds for abortion access.

Abby Agnew, senior in marketing, said she is a member of FIRE and one of the rally’s organizers. The rally, Agnew said, was to “promote a positive message about abortion access.”

“People support pro-choice, but are quiet about it, so there’s still this stigma surrounding abortion and abortion access,” Agnew said.

The rally’s subject matter is a sensitive topic for some individuals, Agnew said, and the event’s purpose was a positive one.

“We don’t want to encourage any sort of confrontation,” Agnew said. “We’re trying to keep the event as positive as possible.”

According to Agnew, the sensitivity surrounding the topic of abortion is one reason why events such as this rally need to be held.

“(The) Kansas Legislature proposed 43 restrictions on abortions, 30 of which passed,” Agnew said. “It’s a fight here and now in Kansas. A lot of people here are uncomfortable talking about (abortion), but that’s why it needs to be talked about. People may never be ‘ready’ to talk about these issues, so we need to ‘ready’ for them.”

At 1 p.m., a speech was given by Sandy Brown, president of the Peggy Bowman Second Chance Fund. The Peggy Bowman fund is a Kansas volunteer organization that helps women who cannot receive abortions for financial reasons by providing them with the funds necessary.

“I get phone calls from young women who are desperate because of an unplanned pregnancy,” Brown said. “I go to events like this to advocate abortion access and because I want all women in the state of Kansas to know that we will help you.”

Michael Rogers, graduate student in drama therapy, was passing by the rally and stopped to sign the petition.

“At one point in my life, I had to make the decision to have the procedure done,” Rogers said. “It ended up being the best decision for both of us. At the time, neither of us possessed the responsibility, means or funding to raise a child. … It’s not an easy decision to make, and it’s a decision you have to make for yourself. But I think anyone should at least have the option available to them.”

Brown said events like the Thursday rally are a boon for her.

“I love to work with young activists; it’s rewarding and enriching,” Brown said. “Going to these events, and seeing students who are passionate about these issues gives me a lot of motivation.” 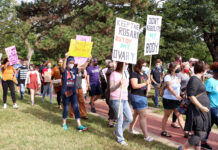 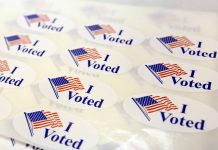