Multiple reports of the storm came in on social media from those who experienced it firsthand.

There's a storm comin. Time-lapse taken from the second floor of DU. pic.twitter.com/bdqtYBAwA1

The first time we've had to use our tornado bunker. That was kind of gnarly, Manhattan! #MHK pic.twitter.com/AZNkw8utdS

Earlier in the evening, students living in the residence halls were moved to the basements during a tornado warning that lasted from 7:35 to 8 p.m.

According to the National Weather Service, more potentially damaging storms are likely to pass through Tuesday afternoon and into the evening. 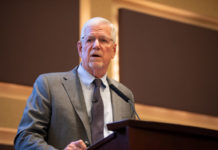