After a challenging year and a half transition period, K-State completed the switch to the new learning management system, Canvas.

The change came with varied opinions from both students and faculty that revealed both positivity and frustration, according to The Collegian article published last spring “Teachers, students attempt to adapt to Canvas.”

Now that the transition period is over, some students, such as Kaelynn Utt, sophomore in biology, are pleased with the simplicity and efficiency of the program.

“I like navigating Canvas a lot more than I liked using the Classic system,” Utt said. “It is much more simple, efficient and organized.”

In addition to the efficiency, Utt said she enjoys the interactive features Canvas offers.

“I like that Canvas offers a way to test potential scores as a way to predict your overall grade in a particular class,” Utt said. “Also, you can download an app to your cellphone for easy and on-the-go access to your grades.”

Gabrielle Lintner, sophomore in marketing, said the initial frustration with the program resulted from information being scattered across various management systems.

“The switch from Classic to Canvas was frustrating due to the slow transition period, the lack of helpful resources and features for students on Classic, and the difficulty to remember which courses were on Classic versus Canvas,” Lintner said.

Now that the transition period is over, Lintner said she has a different perspective.

“Yes, it was frustrating to switch between Canvas and Classic, but now I believe the switch has been worth it,” Lintner said. “I prefer Canvas because I receive email notifications when grades are posted, it displays a calendar option with all upcoming assignments and because it is much more user-friendly.”

While some students’ attitudes toward Canvas seem to be increasing, David Lehman, instructor of marketing, said he is not finding the management system as effective.

“Canvas is definitely not more efficient than the K-State Online course management system that we have used in the past,” Lehman said.

According to Lehman, one of the largest inefficiencies with Canvas is its inability to upload Scantron cards in a way that is easy for professors to navigate.

“Our K-State IT staff has developed a ‘work around’ procedure to make it possible to record Scantron-graded assignments, but it’s a complicated process with a steep learning curve,” Lehman said. “There’s way too many steps, and it’s not very intuitive.” 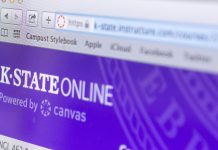 Is Canvas painting a new picture for students?