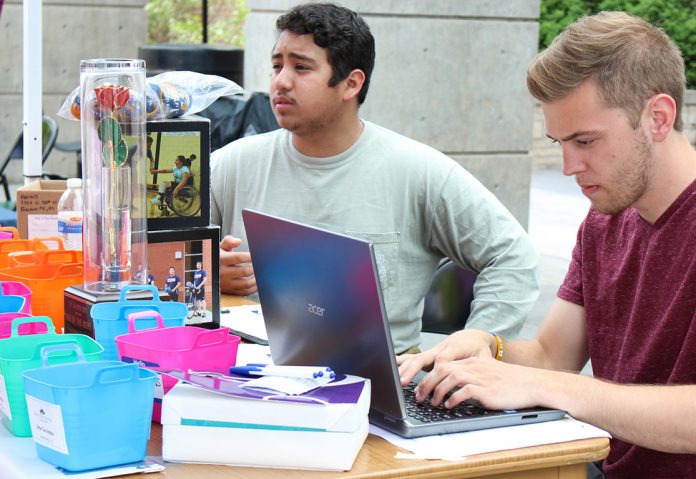 Pi Kappa Phi fraternity has been holding its “War of the Roses” philanthropy event in Bosco Student Plaza April 25-29. From 9 a.m. to 4 p.m., members of the fraternity could be found riding a stationary bicycle to raise awareness, as well as taking donations (after which donors are entered into a raffle).

The event is a partnership with Integrated Behavioral Technologies, a nonprofit that “focuses primarily on children and families affected by an Autism Spectrum Disorder,” according to the “About IBT” page of the IBT website.

According to Simpson, The Ability Experience is a philanthropy focused on helping people with disabilities. Simpson said it does this through events like “Journey of Hope,” a trans-American awareness and fundraising bike ride, and “Build America,” an event where Simpson says, “teams of men from all different Pi Kapp chapters around the country go and build things like wheelchair-assisted ramps and wheelchair-assisted playgrounds.”

Unlike “Journey of Hope” or “Build America,” however, the “War of the Roses” event was not planned by The Ability Experience. Rather, Levi Jones, freshman in secondary education and Pi Kappa Phi philanthropy chair, said it was planned by the local K-State chapter of Pi Kappa Phi.

Jones said they reached out to IBT because, “it lets us interact with the people we’re helping — it’s a good chance for the guys to get a one-on-one interaction with these individuals.”

Before “War of the Roses” began, K-State sororities were paired up with an IBT-assisted family. Throughout the week, sororities could earn points by donating or taking a selfie with a Pi Kappa Phi member and tweeting it to a Twitter account set up specifically for the event. This evening, the sorority with the most points will be declared the winner, and funds raised through the event will go to that sorority’s IBT family in the form of a scholarship, according to Jones.

“Instead of having whoever donates the most money win, we’re using points to decide the winner,” Jones said. “Different sororities might have different financial situations, so we didn’t want to make the event about how much money you can donate. With the point system, you can still be competitive by showing passion and raising awareness on social media.”

Though sororities are the only ones competing in “War of the Roses,” individuals who are not in a sorority can still get involved with the event, and even have incentive to do so by way of a raffle drawing. Every donation of at least $1 could be entered into a raffle to win prizes such as gift cards to Umi Japanese Steakhouse, Carmike Cinemas, Bluestem Bistro and Pita Pit, among others, Jones said.

“We didn’t want sororities to be the only ones who are able to participate, so the raffle was a way to get everyone involved,” Jones said. “By reaching out, trying to include more people and spreading the word, we’re hoping to strengthen the ‘brand’ of the event, the idea being that we can get as many people involved as possible, and have an even bigger, better one next year.”

The current Rose Queen is Lauren Ellis, junior in animal sciences and industry. Ellis said being the Rose Queen is a “big honor.”

“Rose Queen is special because it isn’t something that’s given to you — it’s something you’re chosen to do,” Ellis said. “The guys are great. They’ve always treated me with a lot of respect and dignity, and they’re really passionate.”

Ellis said the “War of the Roses” “came into its own” this year.

“It’s bigger, and there’s more passion, energy and excitement for it,” Ellis said.

Jones said that following the event, the fraternity will re-evaluate it, and figure out how to “get more people involved and make improvements” for next year’s “War of the Roses.”

“This event is something we do every year, so the guys know it’s coming and have the opportunity to get excited for it,” Jones said. “We all really like doing it.”