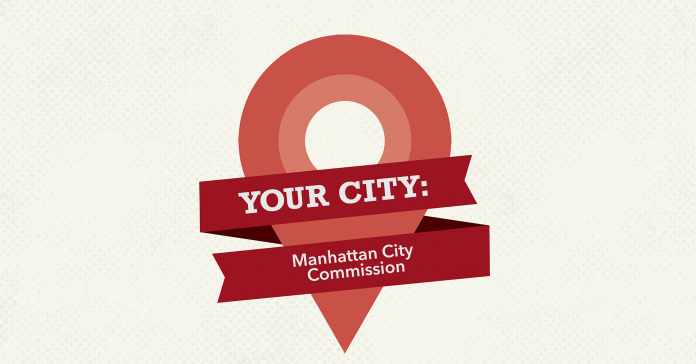 Mayor Karen McCulloh announced that May will be National Preservation Month. Cameron Tross, chair of the Historic Resources Board, was present to receive the proclamation.

McCulloh announced May 14 as designated Food Drive Day. Red Stork, Food Drive Coordinator of Branch 1018 of the National Association of Letter Carriers, was present to receive the proclamation. The letter carriers will be collecting food for the food drive.

May 2016 will begin the Monarch Butterfly initiative. Mayor McCulloh asked citizens to plant native milkweed and nectar plants for food and shelter to create healthy habitats for the Monarchs.

During public comments, Stan Herman, Manhattan resident, requested 17 more straight parking spots near the Douglas Community Center. Herman said currently the city has only made 16 spots, and he would like to see 17 more added to the lot. The commissioners said they will continue to look into the spots and will get back to Herman.

Ted Morgan, Manhattan resident and member of the Flint Hills Human Rights Project, asked to bring attention to the non-discrimination ordinance. He said he asks that the city set enforcements to protect the LGBTQ community from being discriminated against in the workforce. Morgan said creating ordinances to protect that community will make Manhattan a place where individuals want to come for future jobs.

The commission decided to make a work section on May 31 to address this issue further.

There was a final change order for the Manhattan Regional Airport terminal project. The original claim was $152,56, leaving a balance of $344,018 and was not eligible for FFA participation sustainability and will need to be covered 100 percent by the city. The motion was approved.