As someone with attention deficit hyperactivity disorder, this isn’t so much an everyday occurrence as it is a constant state of being.

ADHD isn’t something just reserved for hyperactive, easily distracted children. It was commonly thought that individuals with ADHD eventually “outgrow” it. Unfortunately, this isn’t always the case, as approximately 4.4 percent of adults in the U.S. have ADHD, according to a survey in the 2006 American Journal of Psychiatry article, “The Prevalence and Correlates of Adult ADHD in the United States: Results From the National Comorbidity Survey Replication.”

Finding even this small amount of information was difficult, as there simply isn’t enough research being done on ADHD in adults.

I mention the “outgrowing” of ADHD because that is just one of many misconceptions about the disorder. As with many other mental illnesses, understanding how ADHD impacts you is almost impossible to imagine unless you actually have it.

Telling someone with ADHD to “just buckle down and get it done,” or “focus harder” isn’t going to work, and is more likely to be ignored. This “advice” has been given to them over and over and over again. The problem with statements like this is that they are literally saying, “Just do the thing you’re struggling to do.”

That said, ADHD isn’t just a lack of focus or hyperactivity, these are just common symptoms of the disorder. Lack of motivation, poor memory, poor time-management and organizational skills, impulsiveness, lack of problem-solving skills or difficulties with regulating emotions are just some of the other problems you may face with ADHD.

These problems don’t eventually go away as you get older, with up to 65 percent of children with ADHD growing up to be adults with ADHD, according to the “Long-Term Outcomes” page of the Children and Adults with Attention Deficit-Hyperactivity Disorder’s website.

In many instances, the symptoms of ADHD can lead to other mental health problems. For example, 47 percent of adults with ADHD also had anxiety. In addition, poor academics have been attributed to ADHD, according to the Primary Care Companion to the Journal of Clinical Psychiatry article “Assessing Adults with ADHD and Comorbidities.”

Though there isn’t a cure, ADHD’s symptoms can be somewhat managed with medication. Medicine isn’t a perfect solution — even on medication, I still occasionally struggle with my symptoms — but it is a generally effective one, and getting on medication is one of the best decisions I’ve ever made.

ADHD can be debilitating at times. I think it’s often forgotten in discussions of mental health problems, and misconceptions about ADHD (as well as other mental illnesses) are widespread.

We could all do a better job of trying to understand the limitations our peers, mentors and students work with and look for ways to help them get past those limitations so they can succeed.

ADHD influences the way some students deal with school 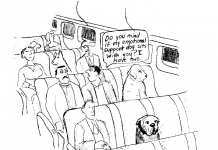