Two K-State College of Education faculty members are taking part in a three-year nationwide initiative for the Center for Civic Education.

Associate professor Brad Burenheide and professor Thomas Vontz are administrating the Kansas portion of the James Madison Legacy Project, which takes place in 46 states and the District of Columbia, according to the project’s website.

The legacy project focuses on identifying cost-effective means of providing widely available professional development programs, which are useful in enhancing the knowledge and skills required of teachers to promote high-need and other students’ attainment of state standards in civics and government, according to the Center for Civic Education’s website.

“Dr. Vontz and I applied for a grant that is being administered by the Center for Civic Education and we’re lucky to be a part of it,” Burenheide said. “It’s a nationwide grant that is evaluating civics education research programs.”

Burenheide said the U.S. Congress began setting aside money again to reinvigorate civics education programs after a three-year period where all the money for the Center for Civic Education programs was taken out of the federal budget.

The grant came from the U.S. Department of Education through the Supporting Effective Educator Development program, according to the website.

“What’s happening is that these programs are coming up all across the country and are being evaluated to see how effective they are, and to look and see if this is an appropriate model to use to train teachers and constitutionality understand the basics of civic education and how best to teach that to their students,” Burenheide said.

The legacy project is designed to provide professional development for middle and high school teachers in civics and government focusing on the Declaration of Independence, U.S. Constitution, Bill of Rights and the rights and responsibilities of citizens, according to the K-State College of Education newsletter.

“The goal for us here in Kansas is to, one, promote civic education, two, to be part of this national data test where we can look and see what is the best way to deliver this civic education content, and then three, just to bolster the teaching of civic education,” Burenheide said.

The program has three cohorts, and the first cohort is taking place now, Burenheide said.

“We’re still in preliminary stages,” Burenheide said. “Cohort one was kind of the pre-test, and so we’re using that to collect some baseline data of how effective is baseline data. We’re still in the data-collection phase. Cohort two is going to be looking specifically at a face-to-face scholar teaching model and then cohort three is going to be more of a video-based instruction model where it’s more support rather than direct instruction from scholars.”

Burenheide and Vontz are in charge of 25 secondary social studies teachers across the state of Kansas who applied to the program.

“We’re responsible for providing the professional development for teachers, recruiting the teachers and then also following up with it and seeing how they use this information in their classrooms and with their kids,” Burenheide said.

On April 15, Burenheide and Vontz held cohort one of the Kansas portion of the James Madison Project, performing simulated congressional hearings.

“We had 25 practicing teachers on campus participating in the simulated congressional hearings, which is the main way knowledge is demonstrated in the project as far as students go,” Burenheide said.

The two also provided several rounds of professional development along with other things, Burenheide said.

“There’s a stipend involved,” Burenheide said. “The teachers get a miniature classroom constitutional-library-type thing and it’s just to promote civics education and really get a grasp for its field and how to improve civics (education).”

Burenheide said throughout the three years, a group at Georgetown University will be collecting the data from the three cohorts in all the different states to analyze.

“They’re going to check it and see if there is any correlation between the learning models and how they’re delivered and see what is actually the most effective,” Burenheide said.

He said this will be one of the largest civic education data sets ever collected.

“It’s going to be an evaluation of mentors, teachers and participants just to see how effective these models can be,” Burenheide said.

After the third cohort is completed at the end of the third year, there will be enough data to look at and analyze.

“The data is going to be an ongoing process, but it’s going to take them a while,” he said. “Probably at the end of that third year they’ll have some preliminary results and they’ve been adding each year. They have a report to fill out, to submit to the seed project coordinators.”

Burenheide said what he likes about this program is that it is not multiple choice questions, but the questions are more analytical.

“We’re talking about big issues like judicial review, First Amendment rights, the Fourteenth Amendment,” Burenheide said. “And that’s the best part of the program. When you get it down to the students participating in it, it’s a totally different experience with them because it’s not, ‘Alright, how’d you do on the test filling in the bubbles?’ It’s adults listening to students and valuing what they’re saying about the Constitution, which is ultimately the goal of what we want kids doing in this world today.”

Burenheide said he likes the program because it allows Vontz and himself to “geek out” and get into civics education.

“It’s just such an awesome experience to bring this to kids where they learn about the Constitution, talk about it intelligently, and then produce these hearings and talk about high-level Constitutional questions that if it wasn’t for this model, they wouldn’t be able to see what it was,” Burenheide said.

He said this program will help with students’ understanding of civic education.

“Regardless of one’s political beliefs, it’s a tumultuous time here on campus,” Burenheide said. “We need to produce some kids that can look at the situation critically, think about it and come up with ways of understanding how it impacts their future.”

Burenheide said after the data is collected and analyzed, it will set policies on how civic education should be taught.

“Congress is going to be very interested in what we find out because there’s always been this conflict between Congress who provides the monetary means of doing so and then those who practice it,” Burenheide said. “Congress wants to know, especially in today’s world of transparency and accountability, are we getting our bang for our buck providing money for the civic ed program, and that’s what we’re hoping it shows us.”

Burenheide said he recently went to a conference for the project.

“In it, our project coordinators are saying we’re doing a great job because we’re going to be the example for the seed projects showcase to show Congress, ‘Hey, here what’s happening with the money you’re providing us,’” he said.

Kelly Briggs, College of Education adviser, said she sees the benefits Burenheide and Vontz will bring back to K-State after the program is complete.

“They will be using those techniques and those ideas in their classroom in teaching our students how to implement this, so that our students will be receiving that professional development in advance of actually getting into their own classroom,” Briggs said. “It will enhance their own teaching when they get into the schools.”

“Any research that goes into creating more effective strategies for teaching is going to end up benefiting thousands of students and potentially increasing civic awareness across Kansas and the U.S.,” Briggs said.

Kyley Ast, sophomore in elementary education, said she thinks the research findings will be beneficial to the College of Education.

“I think that it’s important to have information like this because it has to do with our country,” Ast said. “I think them doing this research will definitely help out the students in the College of Education by giving them more information about how to teach civic education.”

Burenheide said he likes how students are being exposed to it and great things are happening in classrooms.

“It’s just a great experience and it’s something we’re looking at continuing to get data from and work with,” Burenheide said. 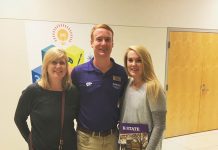 A day in the life of a future teacher 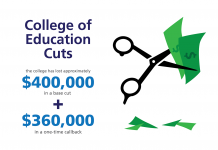 Budget cuts: College of Education evaluates how to maintain quality without increasing fees