Administration, faculty, staff, students and alumni gathered in the K-State Alumni Center last Wednesday for a luncheon put on by Women of K-State – a program run by faculty and staff from all three K-State campuses.

According to the Women of K-State webpage, the group focuses on the “recruitment, retention and advancement of the women of K-State” and “building new relationships between women from all over campus.”

Following a lunch, former K-State professor Juanita McGowan delivered her keynote speech, titled, “What Is Next for You? Weaving a Tapestry of Diversity in the Academy.” During her time at K-State, McGowan was the director of the American ethnic studies program and assistant dean for diversity for the College of Arts and Sciences.

McGowan’s speech began with an anecdote about a dress she owned – a dress that used to belong to jazz singer Ella Fitzgerald. McGowan talked about Fitzgerald’s life and personality, as well as the difficulties Fitzgerald faced.

McGowan used these stories as the foundation for her messages about empowerment, perseverance and the importance of maintaining a positive outlook on life. For instance, McGowan listed the titles of a handful of Fitzgerald’s songs, and pointed out “tidbits of wisdom” that the audience could glean from them.

“We empowered women cannot afford to just survive – we must strive,” McGowan said.

She stressed the importance of being “seen, heard, authentic, resilient and courageous” and related those attributes back to Fitzgerald and her success.

She also discussed the struggles of balancing one’s work and personal life and ways the audience could maintain a healthy balance. McGowan urged audience members to “become your own life coach” and explained a process for achieving this, by clarifying personal goals, breaking them into smaller steps and holding yourself accountable for achieving them. She also said audience members should celebrate progress when steps are completed.

Karen Tinkler, president of the Manhattan branch of the American Association of University Women, attended the speech. According to Tinkler, the association is a nonprofit organization focusing on equity and empowerment for women.

Tinkler and Nancy Bolsen, an association member and former Director of Adult Student Services at K-State, both said their biggest takeaway from McGowan’s speech was the idea of being your own life coach.

“I think it’s something that’s kind of a popular concept, but it’s crucial for anyone looking at their lives, trying to improve them and raise their self esteem,” Tinkler said.

McGowan’s speech also addressed ways to understand and cope with change. She suggested that audience members take time to process and understand new changes, celebrate the possibilities it could bring, and ask themselves how much of the situation they control.

If it can be controlled, McGowan encouraged audience members to take proactive action. If not, McGowan noted that it was healthier and less stressful to “accept and reframe – the battle isn’t yours.” She advised using the unwanted change as “an opportunity to learn and grow.”

“After I retired, I noticed that I felt really tired and really burnt out on issues of diversity,” McGowan said following her speech. “However, I soon realized that being retired allowed me to take a step back, to stand on the outside and look in. When you can do that, you can see diverse perspectives and be more objective. It gave me greater clarity.”

In closing, McGowan asked the audience to answer a series of questions about their professions and identities with a show of hands. She pointed out that despite audience members fitting into a range of different categories, they often overlapped with one another.

“One thing you’ll notice about a tapestry is that every color, every role, every position stays distinct – nothing eliminates something else,” McGowan said after her speech. “The truly beautiful thing about that, though, is that all those separate elements come together to make a cohesive and complete whole.”

Lauren McKnight, program coordinator for Women of K-State and senior administrative specialist for the K-State president’s office, said the luncheon and speech event serves as a way to inspire and give “a bit of hope to” the Women of K-State organization for the following year.

“It’s kind of a way to go ‘OK, we have 300 people here, hopefully we’re gonna have a great turnout at our future events,'” McKnight said.

According to McKnight, Women of K-State would be meeting a week after the luncheon to begin planning events for the fall. Women of K-State hosts this event every summer, though lately the organization is trying to mix it up a bit.

“This event used to be about balancing personal and professional life, but that’s something that doesn’t really have a clear answer,” McKnight said. “Instead of hearing the same thing every year, we decided to change it up and incorporate that message into something broader.”

Tinkler and Bolsen pointed out that the positive and broad nature of the event’s message made it more accessible.

“I don’t think the message is one that’s good for just women to listen to,” Tinkler said. “I think this would be a good thing for anyone who’s trying to find their way in the world to listen to.” 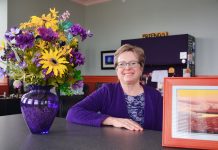 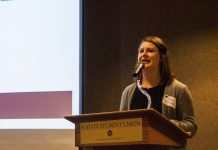 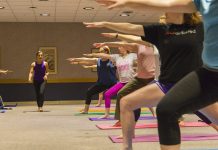