Around this time last season, K-State basketball was entering a youth movement. One of the young Wildcats leading the charge was Florida native Barry Brown.

After a series of ups and downs, Brown emerged as one of the leaders on a team that’s looking to make a run during the 2016-17 season. Brown sat down with the Kansas State Collegian sports editor Andrew Hammond to talk about the challenges he faces going into his sophomore season, traveling to Europe and what he thinks about the current state of the NBA.

AH: You, Dean (Wade) and Kamau (Stokes) kind of had to grow up faster than most freshmen did at this level last year. Do you feel like you guys – you in particular – can avoid the “sophomore slump” label, something that’s thrown around too often?

BB: “Most definitely. I’ve never heard of that term ‘sophomore slump’ myself, but I just feel like with that experience on the court is going to come with better effort. We’ll be able to play better having been in those situations that people haven’t been in since some don’t get to play their freshman year. This past season was very useful, we took a lot of things and just to have that experience is going to help us along.”

AH: Up next for you guys is a trip to Italy and, I believe, Switzerland, right?

AH: So what are you excited about the most when it comes to the European trip?

BB: “Just the experience. I mean, it’s a once in a lifetime thing; a lot of people don’t get the chance to travel state to state, and I’m getting to travel around to different countries. I get to be there with my team, my support staff. It’s going to be fun.”

AH: Anything in particular you’re looking forward to? The food? The teams you’ll be playing? Some of the sights?

BB: “I want to see how we match up against the pros – grown men – we’ll be playing against and also the cultural experience. Just meeting new people and new experiences.”

AH: Going off the court here a little bit, can you name a starting five of the best guys you’ve played against? The five best, no matter what position they’ve played.

AH: Who was the toughest player you had to guard last year?

BB: “Buddy Hield, just based on the fact you have to be accountable for him at all times. You can’t take your eye off of him. If you do, he’ll dart to the other side of the floor and hit an open three. He did that against me a couple of times last year. He’s a 50 percent shooter, too.”

BB: “Kobe Bryant or Allen Iverson? What am I looking for?”

BB: “Yes, if LeBron stays then the Cavs repeat.” 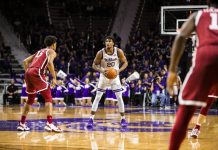