If you’ve been outside or on the internet at all in the last week, chances are you’ve been exposed to “Pokémon GO” in some form. The mobile app from developer Niantic and the Pokémon Company has captured the attention of smartphone owners and prospective Pokémon trainers from across the globe.

As someone who loves video games I treasure what “Pokémon GO” has achieved. People that don’t usually play games are out playing “Pokémon GO.” They’re engaging with my hobby and pastime and – better yet – they’re excited about it. In that respect I think “Pokémon GO” is doing something really amazing.

I also love that it gets people out, about and engaged with the larger community. “Pokémon GO” players are getting exercise, being social, learning about their town and playing a video game in one fell swoop. The core idea behind “Pokemon GO” works, and it works incredibly well.

As for the app itself, this isn’t the case. “Pokémon GO” is a buggy, unstable, slow and poorly designed mess. I had countless issues just trying to play the game, which wouldn’t be very good if it did work – which it barely does.

Launches can be rough – everyone is trying to get on at the same time and the servers can’t handle it. However, just trying to play “Pokémon GO” in the first few days was a game in itself. I would spend hours just trying to connect, and once I got in I might have played for five minutes or so before the game either froze or disconnected me. When I tried to get back in this process repeated itself.

It was infuriating. I went on multiple walks with the sole purpose of playing “Pokémon GO,” but halfway through I would be disconnected from the server and unable to get back in, making the whole trip pointless outside of some free exercise.

The most egregious violation came when I discovered that disconnecting from the server could potentially cost you money. Like most mobile games these days “Pokémon GO” has microtransactions. You can spend real money on stuff like incense, for example, which brings Pokémon to your location for a set period of time.

However, if you use an incense (as I did) and the server crashes (as it often did) then the timer for the incense will still be running. This means that for every second you aren’t using the app while it’s active – whether it’s your fault or not – you are losing out on the benefit of the incense.

I lost four incense to the servers crashing. That’s real money that’s being flushed down the drain, and to me it’s completely unacceptable.

Even though the servers have gotten a little more stable since then, the game is still plagued with issues that run deeper than not being able to connect to a server.

It’s terribly optimized, for starters. “Pokémon GO” doesn’t look particularly impressive, but even on a phone with relatively decent hardware it struggles to run smoothly. Though I did enjoy the novelty of seeing the creatures from the popular series hanging out on the sidewalk, that’s not enough for me to forgive just how slow “Pokémon GO” runs.

Even if the game did run, I don’t think it’s a very good game. Collecting Pokémon is fun, but it’s also a grind. To evolve your Pokémon, you’ll be catching the same Pokemon over and over and over again. Furthermore, the game only has the original 151. I was disappointed by the lack of variety at launch.

Finding Pokémon to catch is also a chore – the game doesn’t give you any clear indication as to where the Pokémon are located other than how close you are. An arrow or circle on the map would have been incredibly helpful.

The other draw of Pokémon is that after you catch them, you can use them in battles against other Pokémon trainers. This exists in “Pokémon GO” but it’s incredibly simplistic and rather limited.

The only time you can battle is at gyms – you’ll fight whatever Pokémon is currently holding that gym with your own Pokémon. Battles mostly consist of tapping on your screen and that’s about it. I understand the need for simplicity in a mobile game but I can’t help but feel that something more could have been done.

The gyms create an entertaining tug of war between the three teams players can join as they fight for control of them, but they also change hands so often that it’s ultimately pointless.

“Pokémon GO” also lacks any robust social features. There’s no way to connect with other people playing the game – you can’t see other players nearby or even talk to other players. There’s no trading (but Niantic says it’s coming), no battling your friends and no way to view their collections.

If you’re enjoying “Pokémon GO,” then by all means keep playing it. The novelty and popularity of it will probably keep me around at least for a few weeks, but for every minute I play “Pokémon GO,” I can’t help but think of how much better it could be. I’m almost always frustrated at “Pokémon GO” but I can’t help but feel a sense of giddy excitement when my friends say there’s a Pikachu down the street – only to be crushed when the game crashes and the Pokémon disappears forever.

I give “Pokémon GO” two out of five stars. 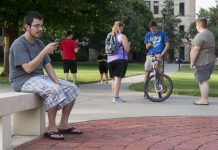 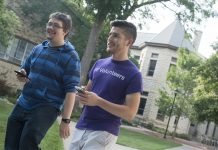