Summer — the season of pool parties, lake barbecues and park picnics, or so you would think. Once again, technology has taken over the lives of millions and diminished all hope we once had of a tech-less summer with the launch of the “Pokémon GO” app.

Mixing gaming with real life has been a huge factor in the app’s success. “Pokémon GO” has more Android users than Twitter and is used more on a daily-basis than WhatsApp, Instagram or Snapchat, with an average of 43 minutes per day, according to BBC article, “How ‘Pokémon GO’ took over the web.”

Nevertheless, as with any new app there are still some flaws.

The app takes up a lot of compute capacity, which has led to several server issues, according to Alex Konrad’s Forbes article, “This site built by engineer fans can tell when ‘Pokémon GO’ servers are about to crash.”

“And with ‘Pokémon GO’ still set to roll out to new countries—its arrival in Canada led to more server issues, and its launch in Japan has been delayed due to server concerns—gamers are bracing themselves for more outages,” Konrad said in his article.

“Pokémon GO” users have found a way around the shock of these outages, however, by going to the site ispokemongodownornot.com. This website allows users to track the service status, which lets them know when the server will work smoothly and when it will not, according to Konrad.

Another flaw in this app is that in the first month, people have reported problems with their phone’s battery life, according to Paul R. La Monica’s CNN Money article, “‘Pokémon GO’ sends smartphone battery stock soaring.”

Despite this being a disadvantage for the app users, Zagg, a small maker of phone accessories, has seen their stock rise more than 25 percent since “Pokémon GO” was released, La Monica said.

On the other hand, the app is said to burn 1,500 calories for women and 1,800 calories for men if the game is played for 43 minutes every day for a week, the BBC article said.

This is an unusual advantage to come with a technological advancement, in my opinion. However, in my three years of living in Manhattan, I don’t think I have seen this many people out walking around for fun … except maybe for orientation week in August.

While I agree that being out and walking around is a good thing, I can’t help but worry this advantage is being canceled out by the lack of face-to-face interactions the app promotes.

Unlike the game’s “gotta catch them all,” mentality, it would be impossible for us to catch all the advantages of the game and escape the disadvantages.

Even if people are not talking to each other while playing “Pokémon GO,” it is promoting spending time together in areas where you can also enjoy nature. 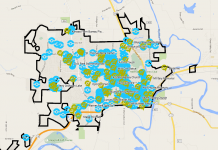