With a new college football season coming soon what better time for Big 12 power rankings? The Sooners are the only team without big questions and seem to be the favorite, but how the rest of the conference will shape up looks to be a toss-up.

Expectations are high for the reigning Big 12 champion Sooners. A return trip to the College Football Playoff is the expectation, however, early nonconference matchups against Houston and Ohio State could make that feat even more difficult this year. Heisman trophy hopeful Baker Mayfield, and running backs Samaje Perine and Joe Mixon return to the high-powered Sooners’ offense.

The Cowboys return many key players from a year ago, including quarterback Mason Rudolph and arguably the Big 12’s best wide receiver, James Washington. The addition of transfer Barry J. Sanders (son of Wichita native and Oklahoma State superstar Barry Sanders) from Stanford could help a running game that struggled a year ago.

Despite losing Trevone Boykin and Josh Doctson, as well as a few other talented seniors, the Horned Frogs look to be Big 12 contenders. The defense will be a big strength for the Horned Frogs this year. The only big question mark is at quarterback, where a two-man battle is currently taking place between redshirt sophomore Foster Sawyer and junior transfer Kenny Hill.

Despite the train wreck that was Baylor this offseason, the on-field product should look fairly similar to last season. The defense might struggle, but the Bears’ high-flying offense should still be good. A nonconference slate filled with cupcakes won’t hurt the Bears either.

This is where things get tricky. You could make a case for any of the teams ranked 5-8 to be in a different order. Texas Tech gets the nod here on the back of their dark-horse Heisman candidate quarterback, Patrick Mahomes II. However, just like previous season’s Tech’s defense, or lack thereof, will dictate how good the Red Raiders can be.

On paper, the defense looks solid with many key starters returning, including safety Dante Barnett. The winner of the quarterback battle between Jesse Ertz, Joe Hubener and Alex Delton will be instrumental in how the season goes. Depth at the wide receiver position will help, as transfer Byron Pringle could have a big impact there. Opening on the road at Stanford will be a big task for the Wildcats.

Week one against the Fighting Irish will help clear the picture on where the Longhorns stand. Young talent is abundant in Austin. The issue is that so is a lack of experience.

The Mountaineers have some talent on offense and a returning quarterback in Skyler Howard. But the defense lacks experience and the schedule isn’t exactly easy.

New head coach Matt Campbell has injected some energy into the Cyclones program this offseason, but the Cyclones will still have a tough time winning games in the Big 12. An upset or two, however, cannot be ruled out when the Cyclones are involved.

The goal for the Jayhawks this season should be to get a single win, something they did not manage a season ago. Just competing in Big 12 games will be an improvement from a year ago. Gaining experience is vital for the young Jayhawks. 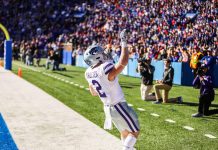 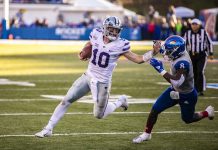 K-State moves up, Kansas comes down to earth in week 11 rankings

K-State moves up, Kansas comes down to earth in week 11...