It’s another fall in Manhattan, which means one thing: the return of K-State football.

You know, the thing that makes you rock back and forth furiously yelling things like “Hey-hey-hey, let’s go state!” and praise the man who wears the same bowl game windbreaker every single game.

Since I won’t be writing for the Kansas State Collegian during this football season, I’ve decided to tell you what’s going to happen because I like causing a stir and watching things burn.

While I could take a more complex route and go game-by-game, it’s much easier to tell you the four biggest things that will happen during the 2016 season for the K-State Wildcats.

1. Ertz will be the starting quarterback.

Some may look at this and think it’s not a “bold statement,” but the K-State quarterback situation was the talk of last summer and some of that lingered. Junior Jesse Ertz will earn the job in fall camp and come Friday, Sept. 2, at Stanford, Ertz will be your starting quarterback.

When preseason pundits talk about a team’s road schedule being daunting, that usually means they may not get a road win during said season. When those same pundits say the same thing about K-State, you might as well go to Vegas and bet on the Wildcats because you will walk out a winner.

K-State’s road schedule is tough for sure, with games at Stanford, Oklahoma, West Virginia, Baylor and TCU. Those five have a very good chance of being ranked at the time and K-State has had some success against a few of them. K-State has won two straight road games versus Oklahoma and West Virginia collectively. K-State’s going to knock someone off on the road, it’s just a matter of who and when.

Yep, I’m stepping up to the plate and calling my shot. Unlike 2015, the Wildcats won’t have to endure the death march-like slate with ranked opponent showing up after ranked opponent. The three toughest games K-State has at home this season come against Oklahoma State, Texas Tech and Texas. Oklahoma State is 0-2 against the Wildcats in Bill Snyder Family Stadium since 2012, Texas Tech is 2-4 in Manhattan since joining the conference in 1996. The Texas Longhorns are 1-5 in the Little Apple since 1998.

OK, OK, before you start throwing stuff and shedding tears I’m going to explain why. Ever since Bill Snyder brought the program back to a competitive level again, this moment has been coming. I mean, he’s won another conference title and brought the program success. With the program’s recruiting push and addition of the revamped Vanier Football Complex, 25 seasons of leading a program is a great place to stop and let the next chapter of K-State football begin. 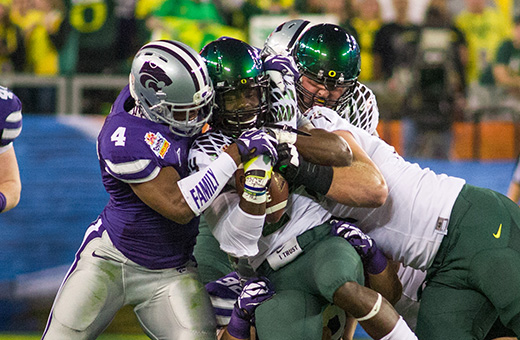