Kansas State students turned the floors of Hale Library into a life-sized version of the classic Monopoly board game Wednesday night.

The event occurred right in the middle of K-State’s annual Week of Welcome, and was intended to familiarize new and returning students with the departments within Hale.

“The purpose of this event is to orient new students to the resources available to them through K-State Libraries,” Charissa Powell, librarian and event coordinator, said. “While the event is targeted at new students, anyone is welcome to attend and participate. We want to emphasize to students that we are friendly and here to help them.”

Players navigated through Hale’s different areas, and after being informed of the department’s purpose and services at each station, the students collected Monopoly cards.

The game ended in Hale’s Great Room, where a selection of prizes awaited students.

The Hale Monopoly game is a tradition that continues into the Fall 2016 semester, despite it being the start of a school year in which the library’s hours have been cut. The building was previously open 24 hours daily Monday through Friday, but has recently been reduced to a midnight closing time during the school week.

The loss of open hours originated in a university-wide budget reduction. According to K-State Today, this was the result of a modest decline in student enrollment and a cut in state general funds.

In the past two years, K-State Libraries has lost nearly $1 million in general use funds.

Enthusiasm for the Monopoly event was not diminished by budget restrictions. By 7 p.m., student players were lined up at the game’s startup desk near Hale’s main entrance.

“We actually saw people running at the entrance line and in parts of the building,” Jordan Green, a K-State Libraries ambassador and senior in animal sciences, said. “It looked like a lot of fun for the students.”

This year’s final game-winning incentive was the chance to win a K-State T-shirt. The prize was rewarded to those who could turn in the total number of cards collected at each department’s station within the library.

“We are (running) because the first 150 to finish win a free T-shirt,” Rachael Duden, freshman in secondary education, said. “It’s been (a) really fun way to learn my way around, and to spend some time with my roommate outside of the dorm.” 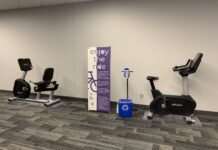