Sonjay Baker, a Radina’s Coffeehouse and Roastery barista has spent the past two and a half years preparing hundreds of students’ and locals’ drinks. Soon after coming to Kansas State, Baker, who is a junior in agricultural communication and journalism, developed a coffee addiction and couldn’t see himself working anywhere else.

“I didn’t drink coffee before college at all,” Baker said. “I came to K-State and immediately started drinking coffee because that’s the adult thing to do and got hooked in coffee culture. After being [at Radina’s] every night for weeks I decided this was the only place for me to work.”

Also, according to Baker, the atmosphere in the local coffeehouse differs greatly from morning to afternoon to night.

“During the mornings we have a lot more time to talk one-on-one with people, ask how their days are going, like two friends talking,” Baker said.

Avid customers, such as Mackenzie Penny, sophomore in chemical engineering, who would stop by about four times a week last semester, said despite the influx in customers during lunch hours, it doesn’t seem to affect the employees’ speediness.

“They’re really fast; I could get in and out in like four minutes,” Penny said.

Once the afternoon rush is over, Baker said he loves the nighttime vibe, describing it as a polar opposite of the afternoon activity.

“It’s a lot more chill, people getting together talking about their days and unwinding; it’s a really cool feel,” Baker said.

While Baker enjoys sharing his coffee addiction with the rest of Manhattan, his favorite part about working at Radina’s is, hands down, the people.

Bethany Schifferdecker, junior in political science, who is known to stop by the local joint two to three times a week, said it’s hard to overlook the cheery atmosphere Radina’s employees give off.

“They are all really nice and helpful,” Schifferdecker said. “If I have any questions about the coffee or anything they answer them. They’ve always been really friendly.”

Schifferdecker said that with locations popping up all over both on and off campus, Radina’s is a very convenient place to stop in. Besides simply being a coffeehouse, Schifferdecker said it’s also a great option for people looking for a place to grab lunch, study and catch up with friends. 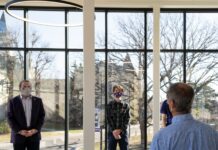 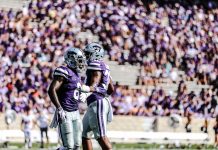 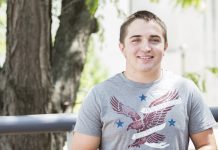