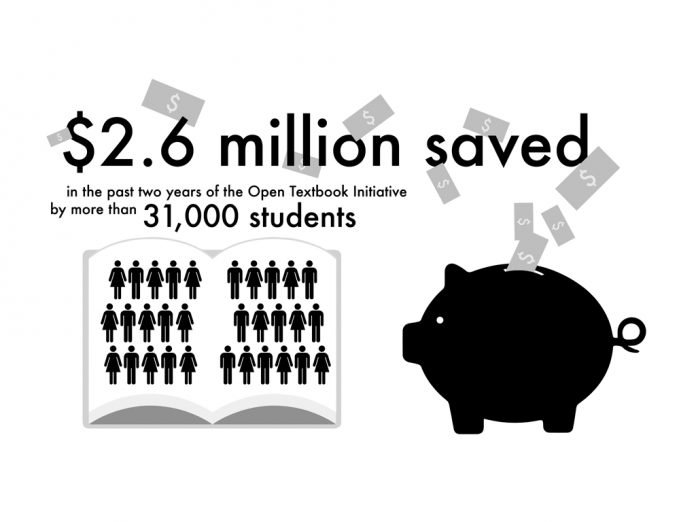 That’s how much money Kansas State students have saved on textbooks in the last two years, according to an estimate by Brian Lindshield, co-creator of the Open/Alternative Textbook Initiative and associate professor of food, nutrition, dietetics and health.

Lindshield, along with Andrew Bennett, professor and department head of mathematics, and Beth Turtle, former associate professor and head of scholarly communications and publishing at K-State Libraries, developed the Open/Alternative Textbook Initiative in 2012 as a way to both reduce costs to students and improve education.

“I wasn’t satisfied with the books that were out there,” Bennett said. “So I thought, ‘We can do better.'”

As technology drives changes in the learning environment, Bennett said the initiative allows for better understanding of material that can go beyond what is found in a traditional textbook. Bennett himself has replaced the standard textbook with a free interactive one, including a math problem generator to help students learn better.

“I don’t want people to ask what textbook professors are using,” Bennett said. “I’d rather the question be, ‘What resources are you using for your students?'”

Eighty percent of the textbook industry is controlled by five publishers. This lack of competition has led to rapid price increases, according to a report released this year by Student Public Interest Research Groups. Since 2006, textbooks have increased in price by 73 percent.

The initiative offers faculty a stipend of up to $5,000 to develop or adopt an alternative textbook. More than 31,000 students have seen their textbook costs go down since the program began in 2013, according to Lindshield.

“It’s really been targeted to freshmen and sophomores, though we do have some upper-level classes that are now a part of it,” Lindshield said. “Our eventual goal is to have 75 percent of freshman and sophomore classes not required to use traditional books.”

Lindshield developed his own textbook, called a flexbook, that students can interact with and contains videos, animations, links and texts.

Lindshield said although faculty participation dipped slightly last year, he hopes the new $10 Open Alternative fee will encourage more professors and instructors to develop their own textbooks. The fee applies to those classes that make use of open textbooks and do not require students to purchase a traditional text.

“When we started, we received funding from the central administration,” Lindshield said. “And (Turtle) from the library gave us matching funds. With the fee, $9 of it goes to the department (of the faculty who develop the open textbook) and $1 goes to the initiative. So we’re hoping it will be successful.”

Rekha Natarajan, mathematics coordinator, is one of the early adopters of the program. She said the initiative has worked well for her college algebra classes.

“I thought it was a great idea from the start,” Natarajan said. “In my case, I used an open textbook but developed a supplemental workbook for the class.”

In addition to the cost savings for students, Natarajan said faculty also benefit from the initiative.

“I think it gives them a chance to create their own material,” Natarajan said.

Bennett said he hopes people understand that the university is serious about making school affordable and offering students the best methods of learning.

“I have twice had parents come in to thank me,” Bennett said. “They tell me about the price of all the other textbooks and noticed what I’m offering is different.”