That’s what Brandon Kliewer, assistant professor of civic leadership and leadership coach for the Cats for Inclusion campaign, said as half a dozen people entered an already full room at the Public Discussion and Civic Leadership Training Forum Saturday afternoon at the Staley School of Leadership Studies.

The event, part of the Cats for Inclusion campaign by the Staley School and Black Student Union, gave people a chance to talk with each other in small groups about their experiences with racial identity and issues of inclusiveness.

Bryan Davis, BSU president and junior in business administration, said the forum is a way for people to come together and share experiences.

“The goal is to have students share their stories and different perspectives to help learn about one another, digest the differences in culture and mobilize on what it means to take an anti-racist stance,” Davis said. “And hopefully discuss what a future at K-State can look like in terms of inclusiveness and diversity.”

Saturday’s forum was the first of three spread throughout the semester, with two more taking place in October. Marlee Wesselschmidt, Cats for Inclusion coordinator and senior in finance, said the forum was one way the program used to help build a more inclusive campus.

“It was started as a way to create dialogue between students here at K-State,” Wesselschmidt said. “What we found throughout a lot of leadership classes is that some students are from really small towns who maybe don’t have the same experiences as other people and college is a great way to bring people together.”

Speaking to the group, Kliewer said that shared stories go a long way toward increasing understanding among different cultures and races.

“Stories can be really powerful because they organize the way we think of the world as it is,” Kliewer said. “But they also point to values, processes and strategies for change that can imagine a world as it ought to be.”

Davis said he hoped the event would bring about change to K-State and foster a better environment.

“A successful outcome from this event would look like people leaving with the ability to confidently share their story and use their story to make change within others,” Davis said. 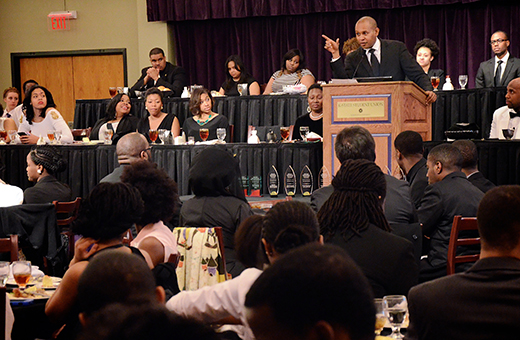