After a thrilling first week of college football that included a double overtime shootout in Austin, a three touchdown comeback in Orlando and a massive upset by South Alabama over Mississippi State in Starkville, it’s time to get ready for this week’s matchups. Here are some of the best games to look out for.

The Holy War is back. The Utah Utes will be hosting the Brigham Young University Cougars Saturday at Rice-Eccles Stadium in Salt Lake City, Utah, with a kickoff time of 7:30 p.m. EST.

The Utes claim an all-time 58-34-4 record against the Cougars, but the Cougars claim that the Utes only lead 55-31-4. The reason for the difference is the Utes count six games played against Brigham Young Academy, BYU’s original name from 1875-1903, but BYU considers their first matchup to be in 1922, which BYU considers to be its inaugural season.

The Cougars come into the encounter after an 18-16 victory over the Arizona Wildcats on a last-second field goal from kicker Jake Oldroyd last weekend in Glendale. Most of the Cougars’ yards on offense came from running back Jamaal Williams, who logged 29 carries and rushed for 162 yards. The BYU defense is also a force to be reckoned with. After questions were being asked about BYU’s switch to a 4-3 defense, the Cougars responded to the critics by sacking Arizona quarterback Anu Solomon four times and had eight tackles for a loss.

The Utes head into the matchup after a 24-0 victory over Southern Utah. Despite not winning by the margin that the Utes were hoping for, there were still some positives to take away. Quarterback Troy Williams threw for 272 yards and two touchdowns. Plus, the Utah defense stuffed Southern Utah to only 158 offensive yards. Safety Marcus Williams recorded a forced fumbled, a fumble recovery and an interception. Look forward to a heated battle in Salt Lake City.

Virginia Tech vs. No. 17 Tennessee

This game could be really interesting, especially when you take the venue into consideration. Already labeled as “The Battle at Bristol,” this game will be taking place at the Bristol Motor Speedway in Bristol, Tennessee. The current record for attendance at a college football game is 115,109, which was set back in 2013 when Michigan hosted Notre Dame at the “Big House.” This matchup is expected to attract more than 150,000 people.

The Tennessee Volunteers enter this matchup with a series lead against the Hokies of 5-3-0. The Volunteers suffered a scare last weekend, as underdog Appalachian State managed to scrape its way into overtime, only losing 20-13. Senior quarterback Joshua Dobbs will be looking to provide better decision-making this week after his struggles against the Appalachian State pass rush. Junior running back Jalen Hurd will be anticipating a good day after his 110 yards on the ground against Appalachian State, along with the game-winning fumble recovery in the end zone.

The Virginia Tech Hokies had an ugly win themselves last weekend as they toppled the Liberty Flames 36-13. Though on paper the scoreline doesn’t look bad, the Hokies lost four fumbles to the FCS competition and only led 17-13 with 24 seconds left in the second quarter. New head coach Justin Fuente will be looking to quiet the critics as this is his first real test since taking over in Blacksburg, Virginia after Frank Beamer, Hokies coach of 29 seasons, retired.

Despite the scary No. 15 ranking that TCU has attached to its name this week, Arkansas should have a feeling heading into Fort Worth that maybe it can pull this one off. Neither of these two sides looked convincing in their first week victories. The Arkansas Razorbacks hold a 43-23-2 series lead over the Horned Frogs but the last time these two played was all the way back in 1991, when Arkansas just edged out TCU 22-21.

The Horned Frogs are looking to improve on last week’s performance because despite winning 59-41, giving up 461 yards and 41 points to the South Dakota State Jackrabbits is outright terrible. Replacing last year’s phenom Trevone Boykin, quarterback Kenny Hill wants to continue his form from last week. Though he didn’t start too well, he finished the game with 439 yards in the air and two passing touchdowns, along with three rushing scores.

The Razorbacks narrowly edged Louisiana Tech last week, 21-20. Keon Hatcher was huge for Arkansas with his 12.7 yards per target and 85 percent success rate, finishing with six catches for 89 yards on seven attempts. However, if Arkansas wants to win this game, it needs to revive its running game. Rawleigh Williams III led the Razorbacks, producing only 96 yards and a touchdown on 24 carries with an average of 4 yards per carry. With that being said, the Arkansas defense should be hitting the Horned Frogs’ offensive line hard. Anticipate a close one in Waco. The game kicks off at 7 p.m. EST. 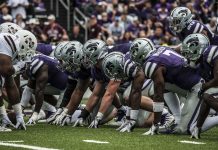 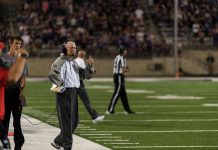