On Wednesday, Apple Inc. held its annual iPhone keynote to unveil the latest phone technology. Through the last ten years, Apple has had incredible innovations in the iPhone that has completely redefined life for its users.

Apple in the past has provided upgrade after upgrade on its current feature offering every year. Better cameras, longer battery life, faster hardware, bigger screens, better connectivity and more. This year, though, Apple made a shift that doesn’t seem to be an upgrade at all to some people.

Say goodbye to the headphone jack.

This has been met with a public outrage. Users seem dumbfounded that Apple would remove such a key feature. Some are even economically suspicious of Apple’s decision.

Following the keynote, I was talking to my mom about Apple’s decision, and she was simply frustrated.

“I own three different sets of headphones, Austin. One set for the office, one set in my truck and one set at home,” she said. “They probably did it just so I have to go buy three more sets that work with the new iPhone.”

A valid accusation, considering Apple’s acquisition of the Beats brand.

I promise you Apple didn’t do it for financial gain, and I promise Apple has the user’s interest at heart. Level with me.

Back in 2010, Apple released the first iPad, which has refined how many people complete tasks that require more than a smartphone, but don’t require a full computer. During this time of uncertainty on how an iPad should fit into a user’s daily life, many people were begging Apple, and thus Steve Jobs, to support Adobe Flash Player, which Jobs addressed in an interview.

“We’re trying to make great products for people, and we have at least the courage of our convictions to say we don’t think this is part of what makes a great product; we’re going to leave it out,” Jobs said at the D8 Conference in 2010. “Some people are going to not like that, they’re going to call us names … but we’re going to take the heat.”

Jobs goes on to say Apple intends to focus on working on new technologies that will best benefit the customers. If the product doesn’t work for the consumers, then things will get worked out.

Jobs said Apple had the courage to take the heat and lose customers for the sake of shipping a great product. So, Adobe Flash Player was never added to the iPhone or iPad, and it forced the development and reliance on new, more efficient technology. Today, users never think of the need to use Flash Player. Jobs forced innovation to take place through having the courage to ship a product the way he believed it should be shipped.

During the keynote on Wednesday, Phil Schiller, senior vice president of worldwide marketing at Apple, echoed that same sentiment.

Schiller said there were three key reasons that Apple removed the headphone jack: the ability to use the Lightning connector for sound, the high value of internal space within ever thinning devices and, most importantly, the need to press forward into a wireless world. This future wireless world Apple believes in is one that is only obtainable by creating a suitable catalyst to force innovation.

Directly following the announcement of removing the headphone jack, Schiller unveiled Apple’s new AirPods, wireless headsets that seamlessly connects to user’s iPhones, and the new wireless headphones from Beats. These headphones are what Bluetooth should have been from the start. With promises of easier-than-ever pairing ability, better connection quality and faster charging, Apple is going all in for its vision of a wireless audio world.

Two last remarks for counter-arguments I haven’t addressed: The price of wireless solutions and the massive inconvenience of not having a headphone jack.

Let’s not forget that with such a huge influx of demand for wireless solutions, headphone manufacturers will have to compete in a rapidly developing wireless market by offering more features at a competitive price point. Wireless solutions are expensive now, but through the removal of the headphone jack, these prices will quickly decrease. This is a huge issue now, I agree, but it will be almost nothing in less than three years’ time.

Lastly, there is simply nothing that can be said in regards to the massive inconvenience of not having the physical built-in headphone jack. Yet Apple has provided the best substitute that they can by including an adapter that fits most common headphones with every iPhone so that users could use an adapter to be able to continue using their current headphones. It isn’t perfect, as I won’t be able to charge my phone while listening to music in my car, but it is something.

I own a lot of Apple products, I watch almost every keynote live, and I’m pretty sure my dream job is to become a high-ranking executive at Apple Inc. If that doesn’t make me a fanboy, I don’t know what will, but I hope this article sheds some light on Apple’s controversial decision. 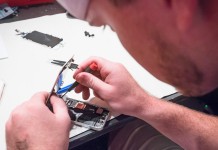