Throughout the years, sorority chapters have employed house directors, commonly known as house moms, to serve as a mentor to the women within the chapter as well as ensure that the house stays up and running.

While tending to maintenance issues is a major part of the job, house moms favor the opportunities they have to bond with the women living in the house.

“The fun stuff is sitting down at the table and talking to the girls about what the heck Watermelon Bust is, and then they sit and tell you all this stuff that they do,” Robin Martin, Pi Beta Phi’s house director, said. “They get so excited about the things they’re involved in.”

This is Martin’s first year as a house mom. She was previously an Alpha Xi Delta in 1988, and after originally interviewing at the Pi Beta Phi house at the University of Kansas, she was hired at the Pi Beta Phi at Kansas State in August.

Martin said that before coming to K-State, all her friends asked her if she was worried about the drama they thought was bound to happen in a house full of college women.

“I had also interviewed for a fraternity house, and people told me the difference between there being drama versus shenanigans,” Martin said. “I think I can handle the drama a little bit better.”

Martin said she enjoys how inclusive the women living in the house are toward her.

“Girls come and get me for lunch and dinner, and I sit with them and just gab,” Martin said.

It is not uncommon for women living in the house to want to reach out and spend time with their house mom, as she can serve as both a support system and a mentor.

June Wilson, Alpha Chi Omega house director, was able to share a special moment with the members of the sorority years ago when they asked her to join their sisterhood as an alum initiate.

“It was probably one of the greatest gifts that they could give me,” Wilson said.

Since Wilson has been at Alpha Chi Omega for 10 years, she has been able to develop lasting relationships with the women who have lived in the house over the years.

“I love my girls,” Wilson said. “I still stay in close contact with girls that were in the house the first year I came here. In fact, I’ve been to probably an average of 10 weddings a year.”

During her early years at Alpha Chi Omega, the women created her an account on Facebook so she could stay up to date with the alumni, Wilson said.

“It’s the most wonderful thing in the world because I get to travel all over the world through their eyes,” Wilson said.

Martin said she enjoys watching the women relate and interact with one another.

“When they’re studying, I like listening to one of the girls getting totally frustrated and another girl going ‘Oh, I’ve had that class’ and sit down and explain it to them,” Martin said. “The peer interaction is so great.”

Wilson said women will often come into her room to find a quiet place to study. Sometimes she talks with them, but other times they will be in her room for hours and won’t say a word since they’re studying.

“I have girls spend a lot of time in [my room],” Wilson said. “I call them my sofa dwellers. Sometimes they just want a place to study that’s kind of away from everybody else, so they’ll bring their things in here and curl up on the couch.”

Jean Reiter, house director of Alpha Xi Delta sorority, said a lot of her job pertains to maintenance, making sure inspections and repairs are done and checking in with the kitchen staff.

“I just do a general sweep of the house in the morning, and then I visit with the cooks and have a meeting about the menus,” Reiter said.

For the majority of house moms, their days are spent checking on house maintenance concerns, kitchen staff, houseboys and members, but Martin is kept busy in a different way as the house is undergoing construction.

“My day is usually spent, since we’re under so much construction right now, meeting with contractors and different vendors,” Martin said.

Even though she often doesn’t know what she’s going to end up doing throughout the day when she wakes up in the morning, Reiter said her lifestyle is different now than it was when she was a house mom for Sigma Phi Epsilon fraternity.

“This is like heaven, but I feel useless, too,” Reiter said. “I kind of keep wondering why [Alpha Xi Delta] has a house mom. While I can see why fraternities have house moms, the girls are so self-sufficient.”

After being a house mom for fraternities for seven years, she made the switch to sorority life.

“I don’t know what made me want to do it, but I’m kind of glad I did,” Reiter said. “It’s a piece of cake here because the girls take care of everything. I’m just so amazed, so I just sit back and smile.”

Wilson also said her job is easy in part because the women in the house are self-governing.

Before becoming a house mom 10 years ago, Wilson was an office manager for a construction company. It was her daughter’s constant pushing and the sudden opening in the position at Alpha Chi Omega that brought her to where she is now, Wilson said.

“Honest to goodness, it is the best thing that’s ever happened to me,” Wilson said. “I wish now that I would have done it a long time ago. I guess people on the outside see what you’re better suited for than yourself sometimes.”

On the other hand, Reiter knew what she wanted to do nearly her whole life, despite teaching for 44 years.

“I always said ‘when I grow up I’m going to be a house mom,’” Reiter said. “I think K-State fraternities and sororities were kind of family long before Bill Snyder coined the phrase. You like to come back to your home, and it really is a home.” 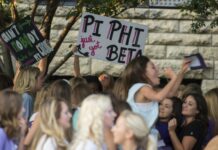 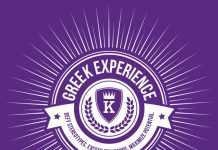