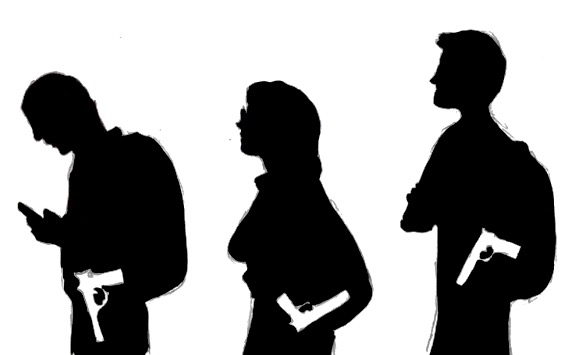 On July 1, 2017, Kansas State will join other Kansas universities in a radical new experiment: inviting unregulated firearms onto its campuses. Sure, eight other states’ universities (most recently, Texas) are now legally required to welcome guns into their midst. But Kansas is different. To carry a gun in Kansas, you do not need to learn how to use the weapon. You require no license, no permit, no background check.

To get a gun in Kansas, you need only a heartbeat and a credit card. Currently, you also need to be 21, though our legislature has proposed lowering the age to 18.

Advocates of campus carry will tell you that armed students make the campus safer because only a good guy with a gun can stop a bad guy with a gun. They are dead wrong. Untrained gun owners are ill-equipped to respond to such emergencies. It’s one thing to hit a target on a firing range, and quite another to hit a moving target who is firing at you and your classmates.

Also, in active-shooter situations, first responders are trained to shoot all people holding weapons as they cannot know who is the aggressor and who is the defender. As The New York Times observed last year, “Concealed carry does not transform ordinary citizens into superheroes. Rather, it compounds the risks to innocent lives.”

In addition to increasing the risk of suicide and fatal accident, armed students make other students uncomfortable and squelch debate. A university should be a safe place where students can discuss important but uncomfortable subjects, where they can engage in vigorous exchanges of ideas. Campus carry changes this dynamic: When every student is a student with a potential gun, an unspoken threat revokes the safety that sustains freedom of speech.

If this troubles you, then please speak up before it is too late. Our legislature and governor created these laws; they can also change them. The particular law that needs changing is called the “Personal and Family Protection Act.” (No, I’m not joking, that’s really its name.) Contact the governor. Contact your local representative. Register to vote. On Sept. 27 at 5:15 p.m., come to the Kansans Against Campus Carry meeting in the Ecumenical Campus Ministry building. And, on Nov. 8, vote.