The voter registration applications of 23,902 potential voters in the state of Kansas are incomplete and currently suspended. Young adults top the list, with 32.5 percent of the names from citizens in their 20s.

“There is no good reason this younger generation is not fully registered and voting,” John Carlin, former governor of Kansas and visiting professor in Leadership Studies, said. “Never mind the fact that this is your right or your responsibility. This is for your self-interest.”

Any mistakes that happen, Carlin said, will not hurt him or his generation anymore.

“It is backwards and upside down,” Carlin said. “Those who should be voting are not. These decisions will impact (those in their 20s) the most, not me. There is no reason they should not care.”

“Once you submit your voter registration form, it does not stop there,” Catherine Hedge, vice president of the Manhattan League of Women Voters, said. “You then must turn in your proof of citizenship.

Valid proof of U.S. citizenship includes, but is not limited to, birth certificates, passports, military records of service and naturalization documents.

To inform those who are on the list, the League of Women Voters of Kansas reported they are purchasing updated copies of the Secretary of State’s suspended list as it comes out, in hopes of sharing the names with local media to get disenfranchised voters off the suspended list and fully registered.

The list of suspended voters can be found at http://lwvk.org/voter-suspended-list.

“The big catch with this list is that just because you are not on the list does not necessarily mean you are good to vote,” Hedge said. “The names are only listed on suspense for 90 days. So if you partially registered in July and then checked the list in October, you won’t see your name.”

If this applies to you, Hedge said, you will have to start the voter registration process from the beginning. To confirm if you are fully registered, Hedge said to check https://myvoteinfo.voteks.org/VoterView/RegistrantSearch.do.

“We know the process is complicated right now,” Hedge said. “But we are trying not to sound cynical. We will be advocating for everyone to have the vote.”

For example, those who register to vote at the local Department of Motor Vehicles office think they’re allowed to vote in Kansas, Hedge said.

“But they’re not (registered in Kansas) because of Secretary of State Kris Kobach’s decision to require that those persons completing the federal voter registration form also submit proof of citizenship to validate that registration form in Kansas,” a press release from the League said.

“A big ruling is expected on Sept. 21, which could really change everything,” Hedge said.

“The League of Women Voters is here to make sure everyone has the opportunity to vote,” Hedge said. “People died for that right and people are still dying for that right around the world. Manipulating that right away would be a real shame.”

“SGA is working hard to make sure students not only start the registration process but complete it. Many students haven’t been aware that there are two components of voter registration and both need to be completed before election day. We think every student’s voice matters and will be following up with students who start the application process with us to remind them of the additional components.”

The secretary of state office did not respond to an email request for comment. 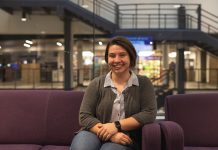 Students came in droves to vote this year, and a lot of it can be attributed to this student senator