Mahomes just can’t be stopped. The junior put up 470 yards and five touchdowns against Louisiana Tech. It was the fewest amount of passing yards he’s thrown in a game this year. Despite Mahomes’ incredible play, Tech has struggled. Mahomes is probably the best quarterback in the Big 12, but will not get recognized as such if Texas Tech continues to struggle.

Washington had a huge game against Pittsburgh on Saturday. He finished with a ridiculous 296 yards and two touchdowns in the Cowboys’ 45-38 win. Washington was named Big 12 Offensive Player of the Week for his performance.

Cannon’s game wasn’t quite as impressive as Washington’s but still incredible nonetheless. Cannon had 213 yards and two touchdowns in the Bears’ 38-10 win over Rice. Cannon and the Bears will look to keep their season rolling against Oklahoma State on Saturday.

Rudolph doesn’t get the love that Baker Mayfield and Mahomes get, but that doesn’t mean he isn’t one of the best quarterbacks in the Big 12. Rudolph had a big game on Saturday against a capable Pittsburgh team as he threw for 540 yards and two touchdowns. Rudolph will face an even tougher test against Baylor on Saturday.

When Foreman has been on the field for the Longhorns, he has impressed. Foreman leads the Big 12 in rushing yards despite having missed the Longhorns’ second game because of injury. Foreman had a big game against Cal on Saturday; he finished with 157 yards and two touchdowns.

The freshman has had an impressive season so far, despite having to deal with a crowded backfield situation at Baylor. Hasty was named Big 12 Newcomer of the Week because of his performance against Rice on Friday. He had 105 yards and a touchdown. Hasty could be a dangerous back in the Big 12 in the coming years.

Yes I know, “he gets all the red zone carries because his dad calls the plays.” But first off, I don’t believe that’s true and secondly, even if it is true, his touchdown numbers are still impressive. Dimel had four touchdowns on Saturday against Florida Atlantic and leads the Big 12 in scoring per game.

Hicks had 117 yards and a touchdown on just 12 carries against Iowa State on Saturday. Hicks showed his big play ability when he broke off a 64-yard touchdown run in the first quarter. The Horned Frogs will need their run game to produce like they did on Saturday if they want to compete for the Big 12 title.

Giles benefits from having a quarterback like Mahomes throwing to him. Still he has quietly been one of the best receivers in the Big 12 so far this season. In his last game against Louisiana Tech, Giles recorded 186 yards and three touchdowns.

Hill has been solid for the Horned Frogs so far this season. In his first Big 12 start, he threw for just 219 yards and a touchdown. He is still second in the Big 12 in passing yards per game and ninth in total rushing yards, an impressive feat for a quarterback. 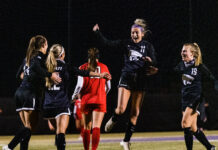