Home Featured Home For D.J. Reed, a “chip on the shoulder” is more than a... 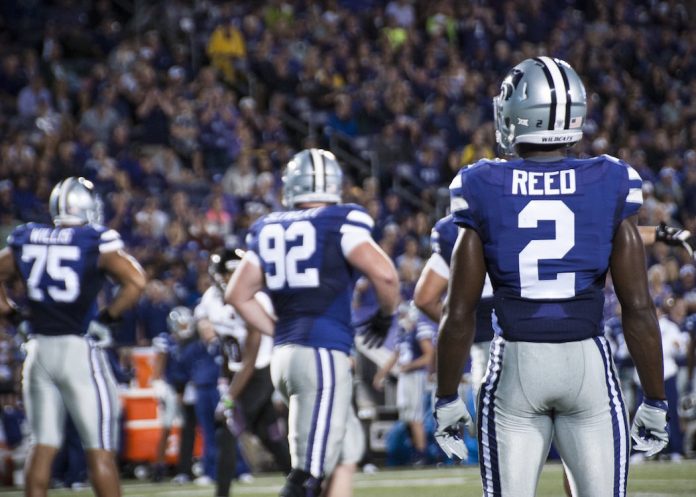 The sound of construction and cars whizzing down Kimball Avenue on a hot and heavy summer afternoon crowded the air as the shadows of senior defensive back Donnie Starks and sophomore defensive back D.J. Reed raced over the white lines on the turf in Bill Snyder Family Stadium.

To the puzzled onlooker, the two players alone on the field jumping and jubilating with glee celebrate for nothing.

For Starks and Reed however, the now empty seats surrounding them are packed to the brim with 50,000 strong losing their minds.

“I want you to close your eyes and visualize yourself making big plays,” Starks says to Reed.

The diminutive Reed, only 5’9″, three inches shorter than his partner on the field, jumps in the middle of the path of a make-believe ball, snags it out of the nonexistent hands of the wide receiver and makes his way downfield. Starks, out in front, clears the way for Reed from the frantic imaginary offensive players trying to run down the intercepted ball.

Reed didn’t even have a Divison I scholarship offer coming out of high school, but now, at least in that moment in the mind of two players witnessed by no one, Reed had his first interception on the big stage.

It would be several months before he did it for real.

Bakersfield, California, sits smack dab in the San Joaquin Valley more than 100 miles from Los Angeles and Fresno from the northeast and southwest, respectively.

Fifteen high schools fill the city with Independence High School standing as the newest, less than a decade old.

In 2013, Reed finished his high school career at Independence with six interceptions, five forced fumbles and became the first person in his school’s short history to earn MVP honors in both football and basketball.

Yet, when the school year had ended, Reed had not one Division I offer to show for his efforts.

After it became apparent that an offer was not on the way, Reed swallowed his disappointment and made the 100-mile trip northeast, walking on to Fresno State.

Reed redshirted, hoping to get through his first year on campus and to show the coaching staff by his second year that he was worth a scholarship and a spot on the field.

After meeting with his position coach and head coach, Reed was dismayed that not only did they see him playing special teams next season but they also weren’t planning on offering him a scholarship.

The news hurt Reed, who truly thought after a year of strength and conditioning, plus learning Fresno State’s playbook, that surely he had done enough to make that next step.

Instead, even with protestations from family for him to remain a Bulldog, Reed took that step and transferred to Cerritos College, a junior college south of Los Angeles.

“My family was telling me to stay but you’re the only person who knows your gut feeling,” Reed said. “So I left.”

As a Cerritos Falcon, Reed recorded 42 tackles and two interceptions in the 2015 season, running one of those interceptions back 74 yards for a touchdown.

After fellow Falcon and current K-State defensive tackle Ray Price tipped off K-State coaches about Reed, the Wildcats gave him his second offer and he committed in the spring earlier this year. Even when more schools kept calling, Reed didn’t waver.

“After that, my recruiting started going real fast but I didn’t feel like there was a need to go anywhere else,” Reed said.

The buzz surrounding Reed’s signing was fairly quiet. When you’re a no-star JUCO transfer who transferred to that JUCO from a school in the Mountian West, that tends to be the case.

It wasn’t just fans who Reed snuck up on either. Most players didn’t know about Reed until they met him.

“I didn’t know who D.J. Reed was until the day coach Hayes called me and told me to pick him up,” Starks said.

When Reed arrived in Manhattan, he didn’t have a car so defensive coordinator Tom Hayes called Starks to go pick Reed up, take him shopping and show him around Manhattan.

“I took him to Walmart,” Starks said with a laugh. “He didn’t even have a shower curtain.”

A bond formed between the two.

“He was really the first friend, first brother I had out here,” Reed said.

And when the rest of the players did meet Reed, it didn’t take long for him to make an impression.

“I knew right when he got here that he was going to be a good player,” sophomore safety Kendall Adams said. “He attacks the ball well, he’s real fast and real physical.”

The physicality was something the K-State coaches identified as well, and was one of the things that convinced K-State coaches to pull the trigger with a scholarship offer.

“Probably the one ingredient that stood out as much as anything was his aggressive play that he could defend well against the run,” head coach Bill Snyder said. “That hasn’t changed since he’s been here.”

If you pressed Reed on the subject, he’d tell you that Fresno State not offering him a scholarship after redshirting still bothers him. Same with not getting offered out of high school. He’s always got something to prove, and he’s not afraid to say so.

Reed would tell you he’s always been overlooked but soon, he feels, that will change.

“If Fresno would have respected my game I’d be balling out there but I don’t look at it as a negative,” Reed said. “I use that as motivation. That fuels me, knowing that they overlooked me. I’m going to do big things here.”

Last season, K-State’s secondary only grabbed one interception. In Saturday’s home opener versus Florida Atlantic, the Wildcats doubled that in one fell swoop.

Adams nabbed one during the first quarter as K-State bullied their way to a 42-0 advantage at halftime. After the half, Reed was itching to make a play.

“(Adams) got the first one, he motivated me, and I kept thinking, ‘Man, if a ball comes my way I’ve got to make a play,'” Reed said.

In the third quarter, Reed made his move, snagging an interception that was anything but easy.

He had made the big play that he had visualized months ago.

“It felt real good,” Reed said, nearly speechless. “Especially with the whole stadium … I can’t explain it. It was just a great feeling.”

When asked if the interception was like he had pictured, Reed paused for a moment.

“I would say so,” Reed said. “That’s probably the most excited I’ve been since I’ve been here.”

After playing just two games in his college career, Reed has already given opposing teams reason to not throw in his direction. By season’s end, Reed would like nothing more than to catch a few more reasons.

He may have been overlooked his entire life, but if he keeps this up, that will no longer be an issue.