While the expense on a football program may not directly translated into wins, Kansas State had the cheapest expense per win of any Big 12 team in 2014.

K-State’s football team spent $1.9 million for every win. The University of Kansas had the second most expensive cost per win in the Big 12 at $6.9 million.

When compared with other power five conference schools, K-State has the fourth-best cost per win, behind only Oregon, Mississippi State and Georgia Tech.

K-State’s cost per win was low because of a relatively high revenue and relatively strong win-loss record.

Across the NCAA, the Texas football program brought in the most revenue at $121 million. Texas went 6-7 in 2014.

Of the top-30-revenue teams, Texas and Michigan were the only two teams with losing records. Michigan earned $88 million, which was fifth-best in the country, while going 5-7.

Three SEC schools spent the most on their programs. Alabama spent $51 million, followed by Auburn at $40 million and Florida at $37 million.

Next week the Collegian will publish the full data from all NCAA Division I FBS programs. 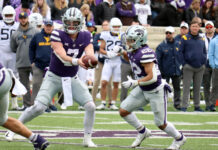 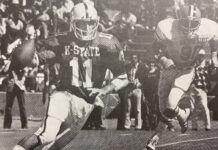 Where Are They Now: Football Ring of Honor inductee Steve Grogan

K-State football ‘Moore’ than a game