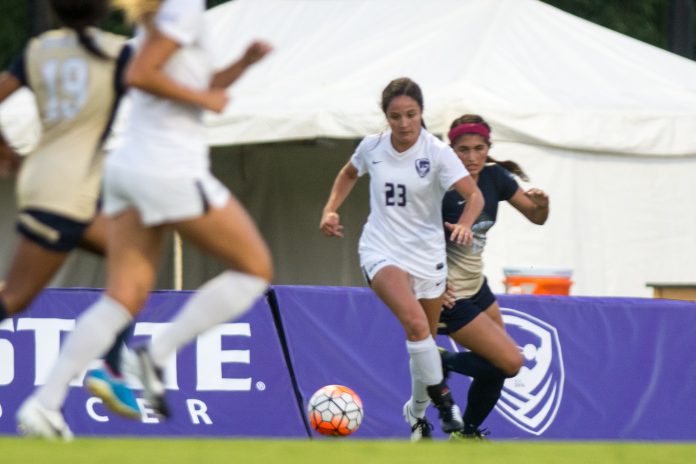 The Kansas State Wildcats earned their third draw of the season with a 1-1 tie against the Oral Roberts Golden Eagles Friday night.

The result made the Wildcats 2-5-3 this season.

It was a night devoid of much of the fanfare that came a week earlier when the Wildcats opened play at home for the first time ever.

There were no pyrotechnics to welcome the Wildcats onto the field, the stands afforded a little more elbow room to many in attendance and not as many people lined the sidelines in the “standing room only” areas.

Perhaps that worked in favor of the Wildcats, who came out strong in the first half then took an early lead on a goal by freshman midfielder Laramie Hall in the 57th minute.

“I thought it was definitely the best first half of the season,” K-State head coach Mike Dibbini said after the game. “We had a lot of good opportunities, we were urgent in play.”

Dibbini said the team played defensively for about five minutes as they tried to protect their one-goal lead, when they instead should have attacked. The Wildcats ultimately relinquished the lead on a shot in the 88th minute by Oral Roberts redshirt junior forward Alexia Herrera.

“I was proud of the way we played tonight in terms of the urgency and creating a lot of chances,” Dibbini said. “We’ll take the point.”

The game was in stark contrast to the first one the Wildcats played at home Sept.16. In that game, against Northern Iowa, they never led, falling behind on two goals in a stretch of two-minutes surrounding halftime.

K-State never trailed Friday, largely because of redshirt junior goalkeeper Miranda Larkin, who made 10 saves, and held the Golden Eagles to just one goal when they previously had averaged 1.7 goals per game.

It was a strong rebound performance after Larkin had allowed two goals a piece in each of the previous two games.

“I thought Miranda (Larkin) did fabulous,” Dibbini said. “She made some massive saves for us to help us out.”

Coach Dibbini said he sense his team got fatigued near the end of the game, but the close nature of the game limited his options as a coach.

“We do have a big bench to help us,” Dibbini said. “But when the game is that tight, it’s really hard to bring in cold legs. You have to grind it out. On their part they looked like they got tired too, so it was both sides. You’ve got to roll with the players that have been in the tempo.”

“We definitely came out stronger and we finished stronger too,” Gallo said. “I feel like we played the whole time. We didn’t bring down our intensity level.”

Gallo said she thinks the team will need to play with similar intensity when they play South Dakota Sunday afternoon.

“I think we’ve got to have the same mentality coming into the next game, and we need to win on Sunday,” Gallo said.

The Wildcats next take on the South Dakota Coyotes at 1 p.m. Sunday.

‘We’ll just do our best’: Shorthanded K-State set for match-up with No. 4 Texas