Although her friends joke about her being a janitor, Vanessa Peterson, sophomore in journalism and mass communications and buildings operations assistant at the K-State Student Union, said her job is not filled with custodial duties.

“It’s a running joke,” Peterson said. “Whenever there’s a mess, they’re like, ‘Okay Vanessa, come clean it up.’”

Peterson said she has worked at the Union for about a month, having found her job at the part-time opportunities fair, which was held at the beginning of the fall semester.

As a buildings operations assistant, Peterson said she primarily makes sure rooms are set up in the Union, whether it be the ballroom for a large event or making sure smaller conference rooms are set up and have water.

In addition to providing setup service, Peterson said she also does walk-throughs of the Union dining area, making sure tables are clean, as well as taking out trash and whatever else is needed.

“I don’t mind anything we do,” Peterson said. “It’s not intense work. However sometimes the work gets monotonous.”

The only inconvenience to the Union’s renovations that Peterson said she has noticed has been the noise. She said at times it gets loud.

Kalene Lozick, senior in agricultural communications and journalism, said she didn’t know students were involved in the setup of the Union, as well as keeping it clean.

“It really puts the word ‘student’ in the K-State Student Union,” Lozick said. “It adds a sense of community, knowing that your peers care about the space that is basically one of the hubs of campus.”

Unlike other on-campus part-time job opportunities, which can be used as internships or have direct applications to a student’s major, Peterson said her job in the Union does not necessarily apply to her public relations emphasis in mass communications.

Her job, however, allows for flexible hours. Peterson said the hours are flexible with school and the atmosphere is academically focused.

“They understand if you can’t work because of homework,” Peterson said. “And I’m so busy, so it’s just nice working whenever I want to.”

On Thursdays, Peterson said she works from 6 p.m. to 9 or 10 p.m., but most days she has time to do her homework when she gets home.

She said she also works on Sunday nights to set up for big events that happen on Mondays or throughout the week.

“You don’t really realize how many events there are in the Union,” Peterson said.

Peterson said there are many events she didn’t know happened before working there, like the movies that play in Forum Hall.

As a public relations emphasis, Peterson said she has noticed the Union Program Council as a more visible entity on campus.

“I think they target the right groups and this year they have been doing more on campus, like going out on campus and advertising,” Peterson said.

Unlike the emails she received last year about UPC events, Peterson said she is more privy to what is going on in the Union because of her job.

In addition to broadening her horizons by increasing her knowledge of Union events, Peterson said she enjoys her coworkers, as they are of a variety of different majors.

“All of my coworkers are really cool,” Peterson said. “I like everyone I work with because they are probably people I wouldn’t necessarily befriend in classes or even outside of classes.”

Arana said he enjoys the atmosphere of the job and his coworkers, who work together to get things done.

Between her busy schedule and class load, Peterson still has time to make an impact on those around her, like her coworker Arana, who said she is fun, energetic and a hard worker.

Arana said Peterson does like to vacuum, contrary to her friends’ jokes about her custodial duties. 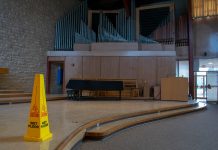 Campus custodians use winter break to their advantage

Campus custodians use winter break to their advantage