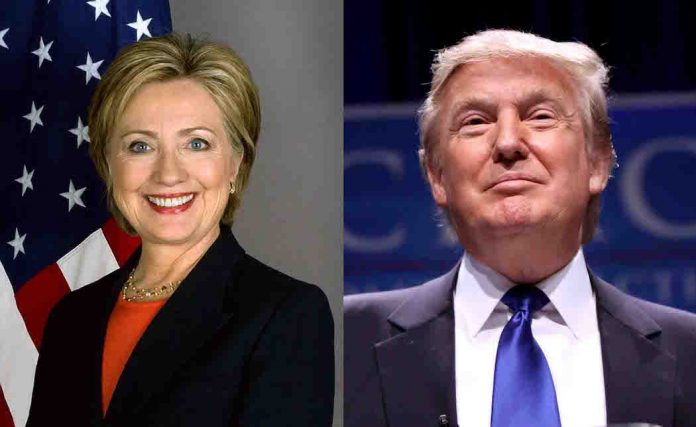 Clinton called Trump’s attempt to out President Barack Obama as a non-citizen “a racist birther lie.”

“He has a long record of engaging in racist behavior and the birther lie was very hurtful,” Clinton said. “Barack Obama is a man of great dignity and I can tell how much it bothered him and annoyed him that this was being touted and used against him.”

Trump said Clinton was to blame for ISIS for not stopping them before they declared a caliphate in Syria and Iraq.

The debate takes place during a tight stage of the presidential race, as both candidates are nearly tied in national polls. the New York Times reports that based on national polling averages, Clinton leads Trump by a margin of 3 percentage points.

Minutes after the debate’s end, Clinton retweeted a supporter’s message that said, “Clinton won this debate in part because she had more stamina for this than Trump. He flagged badly after 30 minutes. She didn’t.”

Around the same time, Donald Trump took to his Twitter to react to the evening’s debate questions, saying, “Nothing on emails. Nothing on the corrupt Clinton Foundation. And nothing on Benghazi.”

For some voters, the race is still not narrowed to only the two major party candidates despite the stage accommodating only two podiums.

“There still is hope. Let me in the second debate.” Johnson said in a Tweet following the debate.

Yahoo News reports that Green Party candidate Jill Stein was escorted from the Hofstra campus by police prior to the evening’s debate. Stein later Tweeted, “I wasn’t there, but I knocked Clinton + Trump off the debates stage w/ my solutions!”

In a informal Twitter poll conducted by the Collegian, out of 256 replies, 64 percent believe that Clinton won last night’s debate.

Who do you think won tonight's Presidential debate?